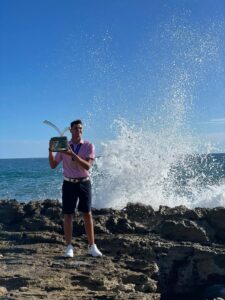 Nineteen-year-old Aaron Jarvis put the Cayman Islands firmly on the international golfing map with an outstanding victory at the Latin America Amateur Championships in the Dominican Republic on 23rd January 2022.

As one of the top Caymanian golfers  he was invited to play at Casa de Campo, Aaron finished strongly on the first day,  tying 11th out of 102 players, achieving two under par in Round One of the four-day tournament.

During Round Two, the University of Nevada Las Vegas (UNLV) player climbed up the leader board to tie third with the round of three under, totaling five under par. The George Town native then consolidated his strong performance in Round Three by finishing one over par, totalling four under par. Aaron Jarvis’s play saw him place a respectable sixth, just three behind the leader R. Nieves (Puerto Rico) at that point.

In the final round, Aaron led by two but dropped short after nine holes. The UNLV freshman then had a bogey on the eighth and a double on the ninth, placing him back to even par four under.

In the last nine holes, Aaron sensing he had the trophy within reach, was two behind the leader with just four holes to go. He then played three birdies and a bogey to end up one behind the leader, Brazil’s F. Biondi. He with a birdie opportunity on the 18th hole, which he capitalised on, finishing seven under par for the tournament tied with the leader. Biondi went on to drop a shot on the 17th to go six under par, putting Aaron in the lead to take the tournament in a thrilling finish.

Speaking of his win, Aaron said: “It was amazing to achieve this accomplishment. It’s still kicking in, a lot of emotions going around. But I’m just happy to see all of the support back home in Cayman.”

Having personally congratulated Aaron, Minister for Youth, Sports, Culture & Heritage, Hon. Bernie Bush said: “Aaron was one of the youngest members of the Cayman Islands National Golf team who won the Caribbean Amateur Championship in 2018 held here in the Cayman Islands. Hopefully this is another step towards Aaron becoming a professional golfer.

Another who added his voice to the many well-wishers was Aaron’s first-ever golf coach Brad De Schiffert.

The former Head Junior Coach of the Cayman Islands National Golf Team, who taught the then 13-year-old at the North Sound Golf Club, said: “I’m beyond proud of the golfer and gentleman that Aaron has become. It feels like yesterday that he was riding around with me watching the older boys play in a tournament that he wasn’t old enough for and you could see a fire was building.

“From there it didn’t take long and in a few years he won the Caribbean Championship by a rather large margin. When Aaron sets goals, he accomplishes them. I feel very proud to have been a part of building his passion for the game. No one works that hard because they have to, but only because they want to. Aaron is a great young golfer and an amazing role model for the younger generation.”

Following his triumph, now back at UNLV, Aaron is set to return to Grand Cayman this summer. With little time to savour his victory, he is preparing to become Cayman’s first-ever player to represent his Islands at The Masters Tournament in Augusta, Georgia in April. He has also qualified for the Open at St. Andrews and the U.S. Amateur as result this win.