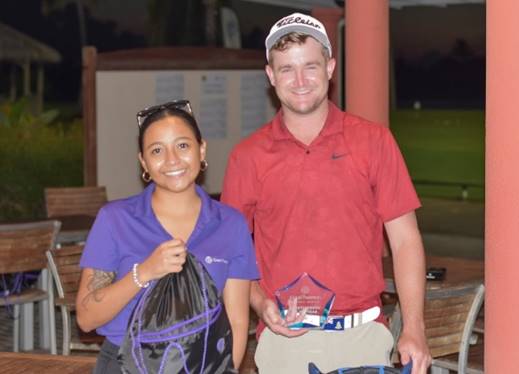 The inaugural Grant Thornton Summer Series concluded on 3-4 September at the North Sound Golf Club. The final event of the four-tournament golf series included both an individual and team competition with each team representing a local charity over the three-round, 54-hole tournament.

Payten Wight was named Sportsperson of the Series, which is awarded to the player who demonstrated the highest combined level of performance, consistency and sportsmanship throughout the series.

“Wight performed well throughout the series and has been a fantastic example on and off the golf course. We are delighted to name him this year’s Sportsperson of the Series,” says Greg O’Driscoll, Partner and Head of Asset Management and Business Development at Grant Thornton Cayman Islands. “We look forward to supporting the GT Summer Series in 2023!”

Donations totaling US$1,000 were awarded to the respective charities being represented with Team YMCA finishing in first position, followed by Team Jasmine, Team Humane Society and Team Inclusion Cayman.

In the individual competition of the final event, an official World Amateur Golf Ranking (“WAGR”) event, Andrew Jarvis finished in first position overall, with a total score of 10-under 203 for his 3 rounds. In the ‘non-ranked’ players division, Barry Daly finished first with a score of 221.

The Cayman Islands Golf Association (“CIGA”) and Grant Thornton as Title Sponsor of the association, aim to grow golf engagement in the Cayman Islands. The addition of the series to the CIGA calendar has strengthened the rankings of many of the players competing in the events, giving them a chance to compete in larger international tournaments around the world. The events have also added to competitive golfing opportunities for local golfers on Island, including junior golfers looking to advance their game.

“CIGA saw an increase in local golf engagement and in the WAGR of local players over the course of the summer. A huge thank you to the Grant Thornton team for their hard work on these events and to Giles Hobday and our own volunteers for making the events possible,” says Jonathan Joyce, President of CIGA. “Congratulation to all series winners!”