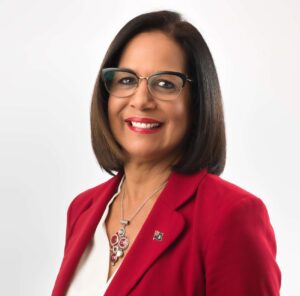 Opposition Education Spokesperson, Barbara Conolly, has congratulated the latest inspection reports on John Gray High School and Layman E Scott Sr High School which awarded both schools an improved rating of ‘good.’  Clifton Hunter High School has also taken a major step forwards, improving its rating to ‘satisfactory’.  In her remarks, which can be seen on the Progressives YouTube Channel (https://youtu.be/uMrQkaSmNhw), she said:

“On behalf of my colleagues in the Opposition I welcome the latest inspection reports on John Gray High School and Layman E Scott Sr High School which awarded both schools an improved rating of ‘good.’  Clifton Hunter High School has also taken a major step forwards, improving its rating to ‘satisfactory’.

I congratulate Principal Clark, Principal Bowen and Principal Wildman on the leadership they have shown in driving forward the improvements in their schools.  I would also like to pay tribute to all the staff at our High Schools who have worked so hard for these tremendous achievements and to thank them on behalf of students and parents at John Gray, Layman Scott and Clifton Hunter.

It is truly excellent news that all three Cayman Islands High Schools have shown progress in the latest round of inspections.  These results demonstrate the effectiveness of the reforms put in place by the last Progressives-led Government to support school improvement.  The country can see the evidence that the changes we made are paying off in terms of improving the quality of teaching and raising the levels of achievement attained by pupils right across Cayman’s public school system.

As the John Gray inspection report notes, even in those areas where the school is currently only ‘satisfactory,’ the opening of the new High School campus, which was a key part of the Progressives investment plan for education, will address the remaining barriers to further improvement.

So, it is now essential that the PACT Government continues to deliver the national improvement programme that the previous administration started so successfully.  With the Hon Julianna O’Connor-Connolly still in place as Education Minister there is the prospect of much needed continuity in terms of policy.

At the election the Alliance of Progressives and Independents pledged that we would push through the reforms needed so that every Caymanian student could learn in a public school rated ‘good’ or better by the end of the four-year term.  I do not expect that the Education Minister will want to renege on that pledge she made to the country when we campaigned together.  The question is whether her new PACT colleagues will share the same determination to see our public schools improve that the Progressives have demonstrated.

Therefore, I challenge Premier Panton to tell the country what ambition he has, on behalf of the PACT Government, for education across our Cayman Islands.  Is he willing, as the Alliance was, to make a public commitment that the standard of all public schools will be raised to ‘good’ or better before the end of his current government?

In conclusion I again wish to say how pleased I am with the continuing improvements in our education system as shown by these recent school inspectorate reports. More work needs to be done but we are well on the way.   Thank you.”