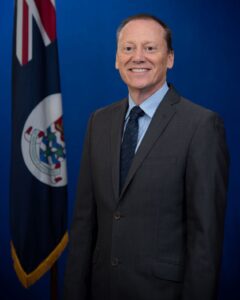 The Civil Service began preparations for the swearing in of a new Government following my meeting yesterday (Thursday, 15 April 2021) with elected candidate Mr Wayne Panton.

As part of the constitutionally mandated process, the candidate representing the majority of votes in the Parliament must meet with me to confirm their ability to form a Government, as Mr Panton has done. I have to date received no formal requests concerning this matter from any other candidates.

The next step in the process is the publication of a proclamation to call a session of the Parliament, which Mr Panton has requested for Wednesday, 21 April, at which all newly elected and appointed Members of Parliament will be sworn in and vote for a Premier.

I can confirm that there is no meeting of Parliament scheduled today. Preparations will continue until a new Government is sworn in. 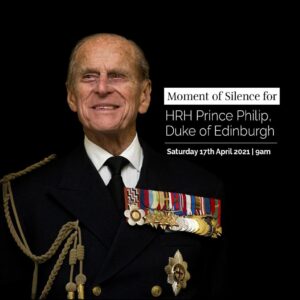 As a mark of respect, a one minute of silence will be observed throughout the Cayman Islands beginning at 9am on Saturday 17th April 2021 in remembrance of His Royal Highness, Duke of Edinburgh.

At the same time, a National minute’s silence will be held in the UK to coincide with the start of the funeral which will be held at the Canterbury Cathedral. The Cathedral is located in Canterbury, Kent, and is one of the oldest and most famous Christian structures in England.

The community is asked to join with us in memory of the beloved Duke who has left behind a legacy of committed service to the monarchy and the people of the United Kingdom and its Overseas Territories.

His Royal Highness Prince Philip passed just a few months shy of his 100th birthday leaving behind many memorable achievements throughout his life including:

The Duke of Edinburgh’s Award which has inspired and impacted generations of young people including thousands of young Caymanians who have successfully enrolled in the awards scheme. He was a co-founder and the first president of the World Wildlife Fund (WWF) from its foundation in 1961 to 1982. As a distinguished member of the Royal Navy Prince Philip was in active service during the Second World War. A lesser known fact, The Duke also had a distinguished career in polo, which saw him involved in the sport for more than 60 years.

The Elections Office confirms that it has received a complaint 14 April 2021 from a candidate concerning the handling of ballot boxes during the General Election.

Supervisor of Elections Wesley Howell notes that section 51 (4) of the Elections Act (2021 Revision) empowers Returning Officers to make provisions for the safe custody of ballot boxes, but does not specify how this process should take place.

“Furthermore, before the boxes are opened, candidates’ agents are able to examine the boxes’ seals for their signatures, which were placed there when the boxes were being sealed up and securely stored.

“As such, the process of transporting ballot boxes is both secure and in full compliance with the law.”

Statement from Roy McTaggart, political leader of the progressives

I am pleased to confirm that we have an agreement with 10 elected members to form the Government and to elect me as Premier. 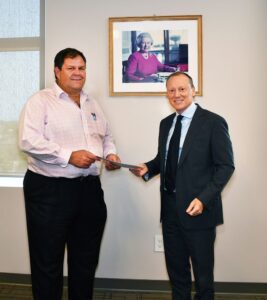 Mr. Panton presented to the Governor his letter confirming that he has the support of the majority of the elected candidates who were successful in yesterday’s General Election to Parliament and that he intends to form the new Government.

Statement from the Progressives

The election is over and the people have spoken.  The Progressives Alliance secured eight seats and we had arrangements with Isaac Rankine and Jay Ebanks for them to help to form the Government when they won.  We recognise that North Side and East End have not been in Government for twelve long years and so we have offered a cabinet seat to Mr. Rankine.  In addition, we also offered Ms. Sabrina Turner a cabinet seat.  It is my belief, and remains my belief, that by re-electing all of the current Ministers, along with two of our Parliamentary Secretaries that the country has voted for continuity of Government.

It appears that despite our efforts at outreach to those we wish to bring into Government, that Mr. Wayne Panton has met with the Governor and provided him with a letter signed overnight by 10 independent members claiming to have formed the Government.  However, over the course of today we have been in discussions with several of the independents or their agents and those discussions continue.  We hope these discussions will bear fruit and produce an experienced and competent government capable of continuing to manage the complex issues confronting these Islands.  We will make a further announcement as soon as there are other developments.

Congratulations to the newly elected Members of Parliament 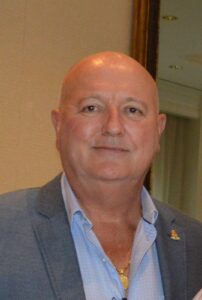 The Cayman Islands Chamber of Commerce congratulates the newly elected members of Parliament. The Council and Staff look forward to working with them in the years ahead to address the many challenges and issues that are facing the Islands.

“There are significant challenges facing the newly elected Government,” said Chamber President Mike Gibbs. “The cost of living, affordable housing, pension and health insurance reform, reopening our economy safely to stayover visitors, strengthening our financial services sector, infrastructure and sustainable development, diversifying and innovating the economy, the environment and improving the education system were the among main issues identified in the Chamber’s public election survey in February and these helped to frame the questions posed during the Chamber’s Candidates Forums in March and April. The Chamber and its members stand ready to work alongside the new government and the wider community to help craft solutions to these and other issues.”

The Chamber has organised Candidates Forums at each election since 1988, offering a free and accessible platform for candidates to engage with the public and discuss community issues.  This year, for the first time, the Forums were streamed live for each of the 19 constituencies. The 19 Forums drew tens of thousands of views from the Cayman and international community, with the most watched one, Red Bay, attracting over 12,000 live views.  Several thousand viewers have also subsequently watched the forums on the Chamber website.

The Chamber would like to once again thank the candidates who accepted our invitation to participate in their respective Forum, as well as our media partners, including Cayman Marl Road, Government Information Services, Cayman Life TV, Radio Cayman and ICCI-FM for agreeing to broadcast the forums. We would also like to extend a heartfelt thank you to Fosters, along with Affinity Recruitment, Boddens Legal & Corporate and Dart for making the Forums possible through their sponsorship.

All election results for the 2021 General Election were officially in before 11.30pm on Wednesday, 14 April 2021. This election is the first time voters chose who they would like to represent them in Parliament since it changed in 2019 from the Legislative Assembly.

For more details on the vote, visit www.elections.ky.

Voters Turn Out to Cast Their Ballot

A steady stream of voters have come forward to cast their ballots in the 2021 General Election at polling stations across the Cayman Islands this morning, Wednesday, 14 April.

At 2pm, the Supervisor of Elections, Mr. Wesley Howell, reported over 60% of electors across the Cayman Islands had voted either in-person or by mobile or postal voting by the first seven hours of Election Day equally 14,237 votes cast.

This is compared to the last election, where 11,620 in-person votes had been collected at the same time on Election Day 2017 out of 21,212 electors (55%) who had not chosen to vote by mobile or postal voting.

Voting began at 7am on all three islands and continues until 6pm today though Mr. Howell reminds voters to avoid waiting until the last minute to cast their ballot.

“I urge everyone to vote as early as they can so they don’t miss out on their chance to have their say in this election,” Mr. Howell advised.

“It’s also a good reminder to check your name in the electoral registry and polling locations, both on our website www.elections.ky to ensure you arrive at the right location,” he noted.

So far, voting has been smooth for the most part barring a few instances of canvassing beyond last midnight and several reports of canvassing within the 300 feet boundary today by candidate agents, he stated. “All reports are being looked into by the RCIPS,” he added.

Donations to OPAAC will Increase Functionality and Appeal 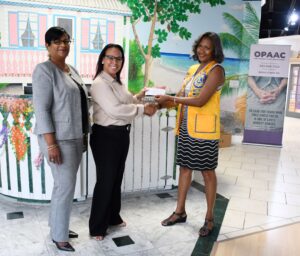 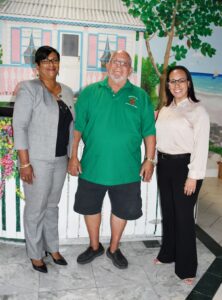 The preparedness of the Older Persons Active Ageing Centre’s (OPAAC) opening on Monday, 19 April 2021 was enhanced by the donation of additional furnishings and fixtures for the spacious facility.

“The sum we’ve donated will go towards purchasing a keyboard, comfortable seating for OPAAC’s library area and a few other items,” said she following the handover to the Ministry’s Chief Officer, Ms Teresa Echenique.

“Giving back to older persons, who are part of our living history, is a good way of giving back to our country,” added Ms Godfrey, whose service club is a longtime supporter of the Ministry’s Older Persons Month activities.

The Cayman Islands Seafarers Association (CISA) has also provided a donation of additional furniture to OPAAC. The non-profit’s gift was similarly acknowledged as a practical gesture which would deepen the association’s ongoing partnership with the Ministry.

“All of our members are older persons, so we are always supporting older persons initiatives,” remarked CISA’s President Mr. Denniston Tibbetts.

In speaking to the specific need for OPAAC alongside more established/specialised entities which cater to the same age demographic, he said: “It’s important because it serves a bigger purpose.”

Accepting the donations, Ms Echenique hopes that such generosity spurs others to ask how they too, can contribute to OPAAC’s free programmes and resources in the months and years ahead.

“The Ministry is extremely grateful for these donations. We encourage the public, community groups, service clubs and the private sector to visit our centre or call us to find out how they can be part of this process. There will be many ways that groups and individuals can be involved. Donations do not always have to be in monetary form but can be in the form of time. We would invite our local musicians, artist, yoga instructors and various other persons to contribute to the activities which are free of cost,” she concluded.

Staff from the Needs Assessment Unit and Department of Children and Family Services will provide on-site social service advice and support – weekdays from 9 am.  The centre’s leisure and social activities will be introduced gradually in the weeks ahead. At its centralised location on MacLendon Drive, behind Priced Right, OPAAC is a short walk from the George Town Shuttle’s (Line 1) Foster’s Airport Centre stop.