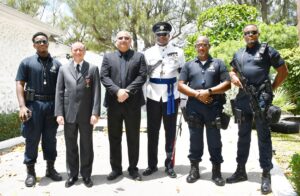 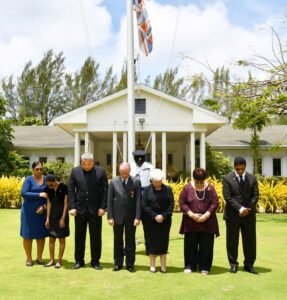 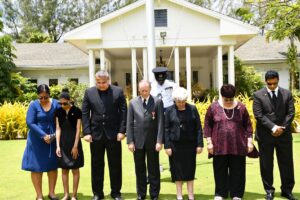 The Cayman Islands bid a heartfelt and affectionate farewell to His Royal Highness Prince Philip to the reverberating booms of a formal 21-gun salute today (Saturday, 10 April 2021) at Government House, the CI Governor’s residence.

Precisely at noon, His Excellency the Governor, Mr. Martyn Roper, accompanied by the Deputy Governor, Hon. Franz Manderson, led the nation’s tribute with heads bowed in respect to Her Majesty the Queen’s Royal Consort the Duke of Edinburgh, who passed away peacefully on Friday morning in the UK.

Joining the Governor were his wife Ms Lissie Roper and National Chairman of the Duke of Edinburgh Awards programme, Ms Katherine Jackson, who was also the first gold award winner in the Cayman Islands’ programme as well as the Governor’s Aide-de-Camp Inspector Ian Yearwood.

Flags in Cayman Islands Government establishments will fly half-mast until after Prince Philip’s funeral, which will take place at St. George’s Chapel, Windsor next Saturday, 17 April 2021. The funeral arrangements have been amended in light of the COVID-19 pandemic and will not have the Duke lying in state for public attendance, it has been announced.

The longest-serving royal consort in British history, the 99-year-old Duke of Edinburgh was Queen Elizabeth II’s husband for 73 years. He was born on 10 June 1921 on the Greek island of Corfu. The prince married Princess Elizabeth in 1947, five years before she became Queen.

Earlier today (Saturday, 10 April 2021) in the UK, from midday, gun salutes took place for Prince Philip in cities including London, Edinburgh, Cardiff and Belfast, as well as in Gibraltar and at sea from Royal Navy warships, according to the UK Ministry of Defence.