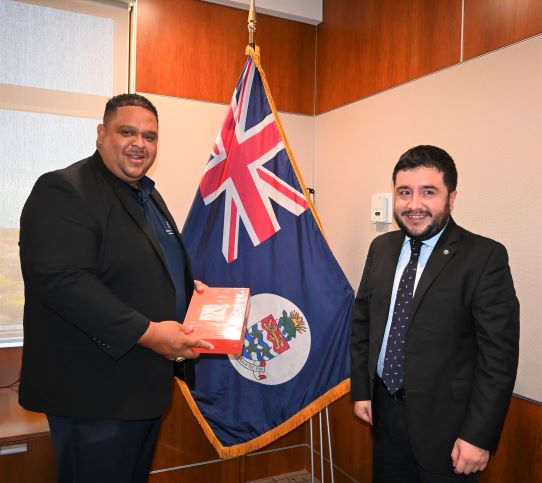 Minister of Agriculture, Hon. Jay Ebanks has expressed his commitment to exploring cooperation with the Government of Colombia on matters of trade to strengthen the Islands’ food and nutrition security.

The Minister exchanged ideas on the matter with Ambassador of Colombia to Jamaica His Excellency Jairo Clopatofsky, Navy Attaché Captain Germán Rojas and Second Secretary, Head of the Consular Section Andrés Pérez-Rodríguez during a courtesy call and hybrid meeting held recently (Friday, August 26) at the Government Administration Building.

Ambassador Clopatofsky noted that that there is immense opportunity for the Cayman Islands and Colombia to work together and that his country is ready to strengthen relations between the two countries.

Minister Ebanks thanked the Colombia representatives for initiating the meeting to promote wider dialogue between Colombia and the Cayman Islands. “Our Government is interested in exploring avenues to diversify and seek high quality and more affordable food sources within the region in keeping with our goal to improve the well-being of our people. With the ongoing and increasing threats to global food supplies, expanding regional trade is critical to our food security and economic stability,” said Minister Ebanks.

He further commented, “We will work to arrange technical meetings to discuss phytosanitary requirements concerning food imports from Colombia, logistics, as well as to organise a scoping mission to Colombia involving the private sector.

An agreed process for cooperation and support is being prepared and the Ministry of Agriculture is scheduled to have further discussions with the embassy in the coming weeks.

Issued by: Ministry of Planning, Agriculture, Housing and Infrastructure (CIG)