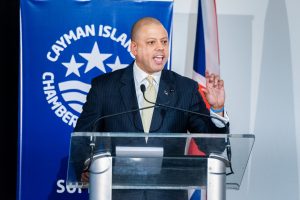 At the Chamber’s annual Parliamentary Luncheon held on the 14 July, the Hon. Andre Ebanks, MP challenged that the Cayman Islands can build its foundation on Financial Services and Tourism to become a global centre of excellence and innovation.

Standing in for the Premier, Hon. G. Wayne Panton, JP, MP, who was in isolation due to Covid-19, Minister Ebanks shared a vision which encompassed, “Accelerating infrastructural changes, improving access to the banking system, creating improved education pathways for our students and adults, and the completion of our National
Development Plan.”

“By using our accounting and risk and asset management frameworks, we have the 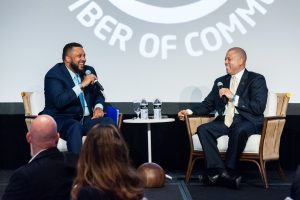 opportunity to leapfrog the competition, creating new jobs, good jobs and sometimes borderless jobs in a digital economy,” he said. “it’s important because it’s happening all around us. Whether we jump into this space or not other countries are, so we can sit around and let it go past us, or we can grab it with both hands.”

But it was essential to put in place the necessary education and training program, so that Caymanians wouldn’t miss
out: “We need to prepare our people for the digital machine age which is coming,” he said.  New tech would open many new doors such as the ‘Metaverse,’ which included, “High paying jobs that Caymanians can get into if we build an education pathway.” 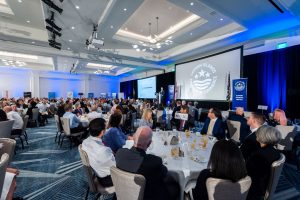 But new tech could complement existing industries, and government’s digital ID programme would not only speed up passport renewals but would also facilitate passing KYC documentation between banks. Medical tech including online and artificial intelligence could also help address the growing medical needs of an aging population, Minister Ebanks said, as he announced the creation of a new, independent institute focusing on prevention, screening and research that would be ready by 2024.

During the question-and-answer session, Chamber President Shomari Scott asked the Minister what the government understood by sustainability. “Coming to agreement on what sustainability means for our country is one of the most important tasks we ever need to tackle…The elephant in the room is a lack of a comprehensive 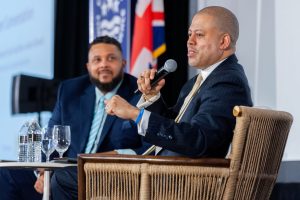 When asked, “How do we get Cayman’s young people to retool to take advantage of the new industries?” Minister Ebanks said, “Through partnerships between parents, and bringing in NGOs to help while we wait for the formal education system to bring these new areas into its curriculum.”

In response to a question on the Digital ID timeline, Minister Ebanks said, “We are aiming by the end of this year to have the enabling legislation before the house. The e-government team has already had the tech in place for the card itself, so we are going to start a series of consultations and surveys with the Chamber of Commerce and other entities to give feedback”.

The minister along with all speakers had a common theme to continuously and sustainability develop the people, environment and partnerships within the Cayman Islands.