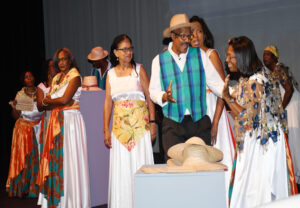 The Cayman Islands Folk Singers shared the Islands’ cultural legacy in song at the Harquail Theatre Friday, 29 – Sunday, 31 October 2021. Although seating was limited to ensure safety, Saturday and Sunday’s concerts were sold out and the extra date of Sunday, 7 November, 6pm is now confirmed.

Run and produced by Cayman National Cultural Foundation (CNCF), the “Memories of Yesteryears” concerts are the group’s first full-length productions of 2021. At the inaugural show remarks were given by Minister for Youth, Sports, Culture and Heritage, Hon. Bernie Bush.

“By bringing these songs and dances into the present, the group is doing a sterling job in keeping the past alive, but also engaging a newer, younger audience,” he said encouraging the inter-generational transmission of Cayman’s culture.

“Such songs of loves lost and found, of seafaring adventures and the highs and lows of life celebrate a uniquely Caymanian experience and perspective long before social media,” Minister Bush added.

Attended by His Excellency the Governor Mr. Martyn Roper and his wife Lissie, the 90-minute, socially distanced show included old favourites like ‘Southeast by South’ and ‘You Have to Wait ‘Til My Ship Comes In’. Masked audience members enjoyed six additional songs on the company’s repertoire such as the eponymous ‘Memories of Yesteryears’ by Miss Gladwyn K. ‘Lassie’ Bush and ‘Cayman Moon’ by Dalmain Ebanks. Attendees also heard 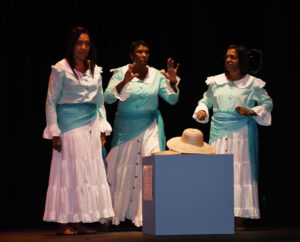 In total the group’s repertoire comprised 11 songs, linked by letters from stage play “Lavina Lee and Her Sisters” by the late Joy Brandon. Narrated by Lorna Bush, the fictitious correspondence between a Caymanian sailor away at sea for four years and his sweetheart, through her sister, lent an added dimension to the shows.

Other special features included musical interludes by Beneil Miller on piano and an original composition by Spark! School of Performing Arts Vocal Performance Troupe. Both elevated the shows with their performances, garnering well-deserved applause and in the case of the young singers standing ovations.

Grouped into four parts: At Home, On the Water, Away From Home and Homecoming, the Cayman Islands Folk Singers drew the audience in with their sonorous singing, which took them on a musical and cultural journey from the perspective of those left at home and those who were at sea. Musical direction by Spark! founder Janelle Tibbetts, and additional arrangements by accompanist Stephanie Williams, the concert was continually shifting pace and focus.

CNCF Managing Director Marcia Muttoo, who also manages the troupe, remarked that it was heartening that former National Arts and Culture awards recipients were among the audience members.  “We were pleased that these torch bearers, many of whom have made cultural heritage preservation their life’s labour, were able to witness the Folk Singers carrying on some of this important work.”

She thanked the Folk Singers’ Musical Director Miss Tibbetts for her participation and that of the Spark! vocal group.  “We are truly delighted to see the respect and appreciation for our Caymanian folk traditions being shared with a talented younger generation.”