Earlier today (Tuesday, 15 March) Deputy Premier and Minister for Finance & Economic Development, Hon. Chris Saunders, presented the Cayman Islands Government’s unaudited financial report for the two-month period ended 28 February 2022 to Cabinet. He noted that for the first time in the Islands’ history the Net Assets reached the CI$2 billion mark. This was achieved with total assets of CI$3 billion and total liabilities of CI$1 billion.

Included in total assets were Property, Plant and Equipment valued at CI$2.0 billion, and bank balances of CI$542.2 million at 28 February 2022.

Bank balances comprised of CI$367.6 million in operating bank balances, which Government can use freely for its day-to-day operations, and CI$174.6 million held as Reserve and Restricted deposits – the use of which requires authorisation by Parliament or its Committees (such as Finance Committee).

The two most significant components of Reserves and Restricted balances are General Reserves and the Environmental Protection Fund (EPF).

Also included in the report to Cabinet was the overall year-to-date (YTD) performance for the two-month period to 28 February 2022 which detailed the following:

The positive variance in revenues compared to the 2022 budget was largely due to better than expected performance in:

The positive variances in the above categories were able to offset the following areas which experienced less revenue in 2022 compared to budget:

The Operating Expenses of Core Government were CI$9.1 million below budget largely due to savings in Personnel Costs of CI$5.5 million and Supplies and Consumables of CI$9.8 million. These savings were offset by higher than expected Transfer Payments of CI$6.7 million, which reflects the enhanced level of monetary assistance made available to individuals and businesses to cope with the adverse economic and financial effects of the COVID-19 pandemic.

However, he sounded a note of caution when it came to the amount of cash held by Government at the end of February 2022.

Deputy Premier Saunders said, “While the year-to-date numbers for the first two months of the year are positive compared to the prior year, the Government is nonetheless mindful of the cash balances at the end of February 2022 being CI$53.8 million less than the prior year and CI$179.4 million below the same period in 2019. This clearly illustrates that we are still feeling the effects of the global COVID-19 pandemic. The Government’s management of cash for the first two months of the year reflects a high level of prudence, as for the first time in three years the Government actually increased its cash position during the respective two-month period by CI$27.6 million in 2022 versus previous combined decreases of CI$123.3 million (CI$47.5 million in 2021, CI$22.2 million in 2020, and CI$53.6 million in 2019) over the same period in the last three years. We will continue to monitor cash, while prioritising expenses and minimising borrowing. Although Government does have the authority to borrow at this point, we are only interested in borrowing as and when it is absolutely necessary in order that we keep interest expenses down.”

Premier Hon. Wayne Panton said, “I would like to thank, the Hon. Minister of Finance, my other colleagues in Cabinet and the many hardworking civil servants for their contributions to these results without compromising delivery of services to the public. While this is a significant milestone in the achievement of Net Assets of CI$2 billion dollars, it could not have been achieved without the contributions of many past administrations. The PACT Government remains committed to exercising prudence and good judgement in managing our finances and will continue to prioritise projects and initiatives that are in the best interest of our beloved Cayman Islands. The Government remains cognisant of the global challenges remaining from the pandemic, which are further compounded by the events in Ukraine. These factors have challenged Ministers to prioritise expenditures without compromising initiatives that are important to the public.” 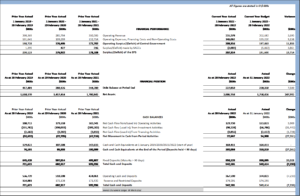 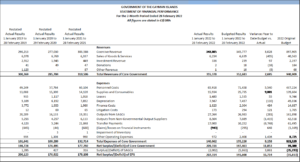