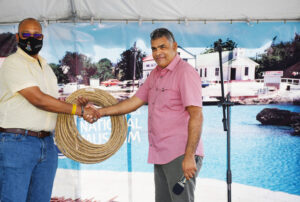 The Cayman Islands National Museum (CINM) celebrated its 31st anniversary with flair, fun and full immersion in the past, during its annual Looky Ya! event on Saturday, 20 November 2021.

This year’s Looky Ya! ‘Old Time Days Come Back Again: How We Used to Live,’ was an all-day extravaganza of indoor and outdoor events and recalled the highlights of Cayman’s yesteryear.

Staged along Seafarers Way (previously Harbour Drive), Goring Avenue and in the museum itself, the event evoked the sights, sounds and smells of how Caymanians lived and celebrated in years gone by. 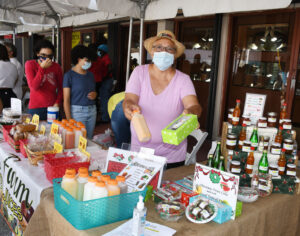 The family-friendly event, encouraged visitors to wander and enjoy the lively atmosphere. Many took the opportunity to take a free tour of the historic courthouse and the museum’s curated exhibitions. 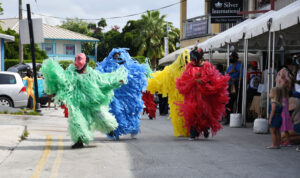 Sharing his remarks, Acting Minister said: “The Museum holds a very special place as the nation’s preeminent centre dedicated to preserving and showcasing Cayman’s human and natural history and culture. Through its wonderfully curated exhibits and artefacts, it does an outstanding job in transmitting and contextualising the islands’ lived experience and geographical features.

“On behalf of the Ministry of culture and heritage and the Government, I congratulate the Museum’s staff and management on the anniversary and for the commitment, 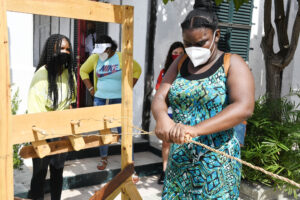 talent and creativity they bring to their work.”

Looky Ya! opened at 10am with traditional piped music and ended at 6pm with a performance by CayNRG Band.

Looky Ya!  also featured live performances including how to make your own thatch rope with Messrs. Jeralow Rankine and Edney McLean, and  the chance to test-drive some old-time wheel carts, used by young children in decades past.

Visitors also enjoyed lively performances by the UCCI Junkanoo Performers, who evoked revellers of yesteryear carousing around the districts close to Christmas.  The UCCI Pandemix Steel Pan and the CI Folk Singers provided musical medleys at the socially-distanced event.

Mr. Curtis Barnett gave a reading from his book Caymanian Epics and the Christmas Jive Dancers charmed the crowds.

After the event, Dr. Lashikar-Denton said: “We are especially grateful to the Ministry for their enthusiasm and on-the-ground support.

“We appreciated the special remarks from Acting Minister Mr. Isaac Rankine, whose acceptance of the peppercorn lease, showcasing CIG’s support of the Museum and its vital role to the nation. The Museum is a non-profit entity charged with preserving and interpreting artefacts of national and regional significance. We could not achieve our goals without all the people and groups who made this day possible.”