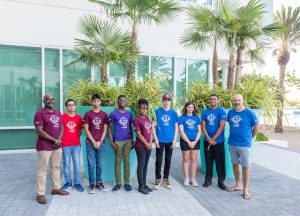 Nine Cayman Islands’ high school students will head to Geneva, Switzerland in October to compete against robotics teams from 180 countries in the FIRST Global Challenge.

All students who participated in the FIRST Tech Challenge held at Camana Bay in March were eligible for selection to the national team. Team members who demonstrated outstanding technical and critical thinking skills, combined with good communication and collaboration, were nominated by their schools for interview by a panel of sponsors and robotics team coaches. The final selection considered the need for complimentary abilities on the team as well as a strong interest in STEM and robotics.

“Selection to the national team requires more than just proficiency in STEM,” said Glenda McTaggart, Dart’s senior manager education programmes who coordinates the team’s entry into the competition as part of Minds Inspired. “As part of the competition, teams are required to take on marketing and promotion as well as fundraising to help support teams from countries who would not otherwise be able to participate.”

Cayman’s national robotics team in 2019 raised $800 for teams from Djibouti and South Sudan who they had the opportunity to meet at the competition in Dubai, while the 2018 team found themselves on Mexican national television.

“Participating in FIRST Global Challenge gives students exposure to cultural experiences in the host country as well as meeting kids their age from other nations,” said McTaggart. “FIRST Global also looks great on a resume, especially for those that want to study robotics at university.”

For the 2022 national team, it will be their first time representing Cayman on a global stage. Guided by coaches Jeff Szeryk (Cayman International School) and Desmond White (John Gray High School), the team will spend their summer planning their strategy and building a robot capable of completing the tasks required of this year’s FIRST Global Challenge.

This year’s theme is Carbon Capture, challenging teams to reimagine the future of earth’s climate. FIRST Global aims to stimulate new ideas that can help solve the world’s problems through innovation and technology. Rising levels of carbon dioxide in the atmosphere are contributing to global warming and climate change. Carbon capture is the process of removing or preventing carbon dioxide entering the atmosphere, either by augmenting natural processes or creating new industrial solutions.

Sponsors of the Cayman National Robotics Team are all involved in STEM and sustainability in their individual industries. The programme’s five initial sponsors at Dart, Health City Cayman Islands, Caribbean Utility Company, Digicel and Aureum Re are joined this year by KPMG.

Further details on the FIRST Global Challenge, which takes place in Geneva from 13 to 16 October 2022, will be announced in the coming weeks.