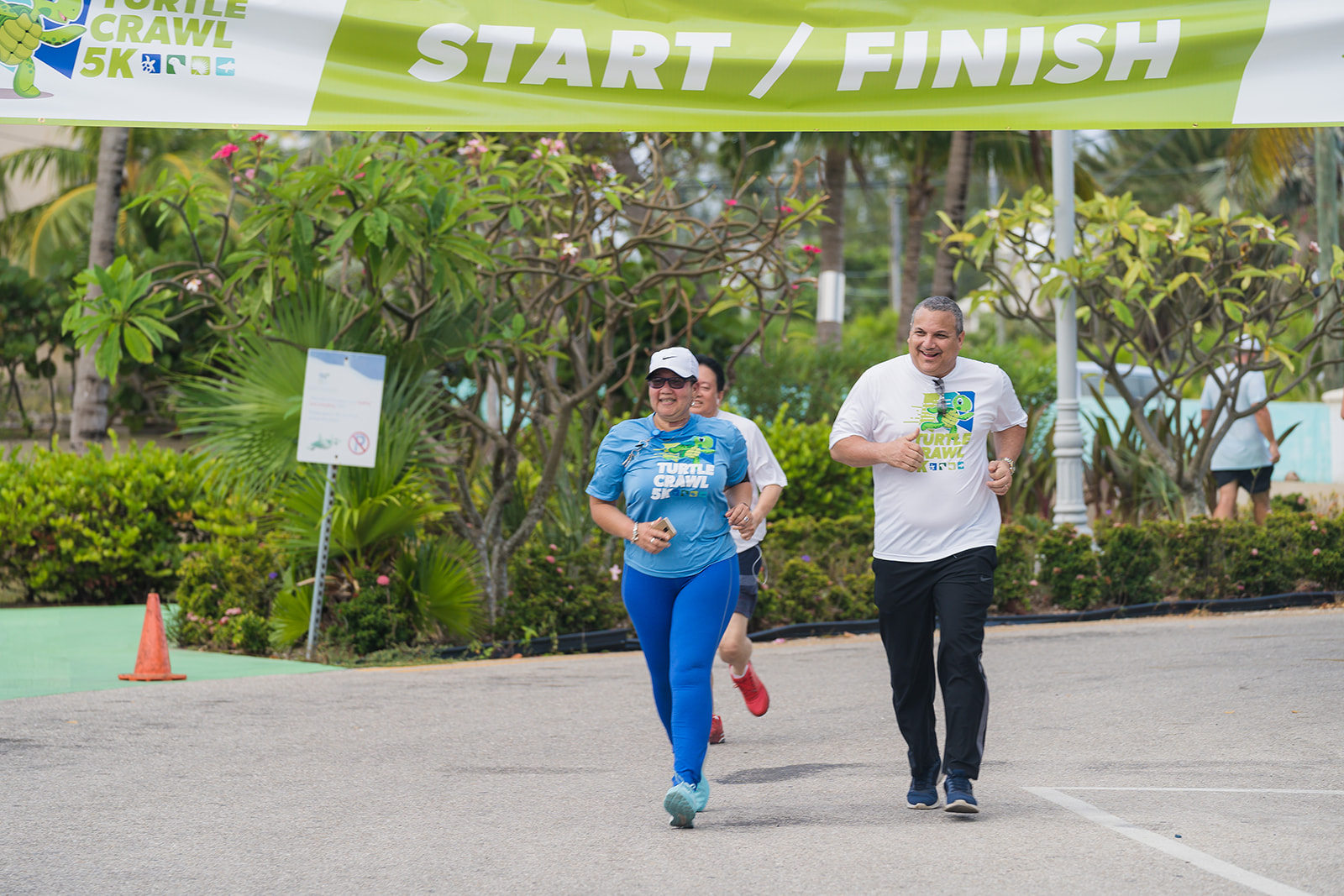 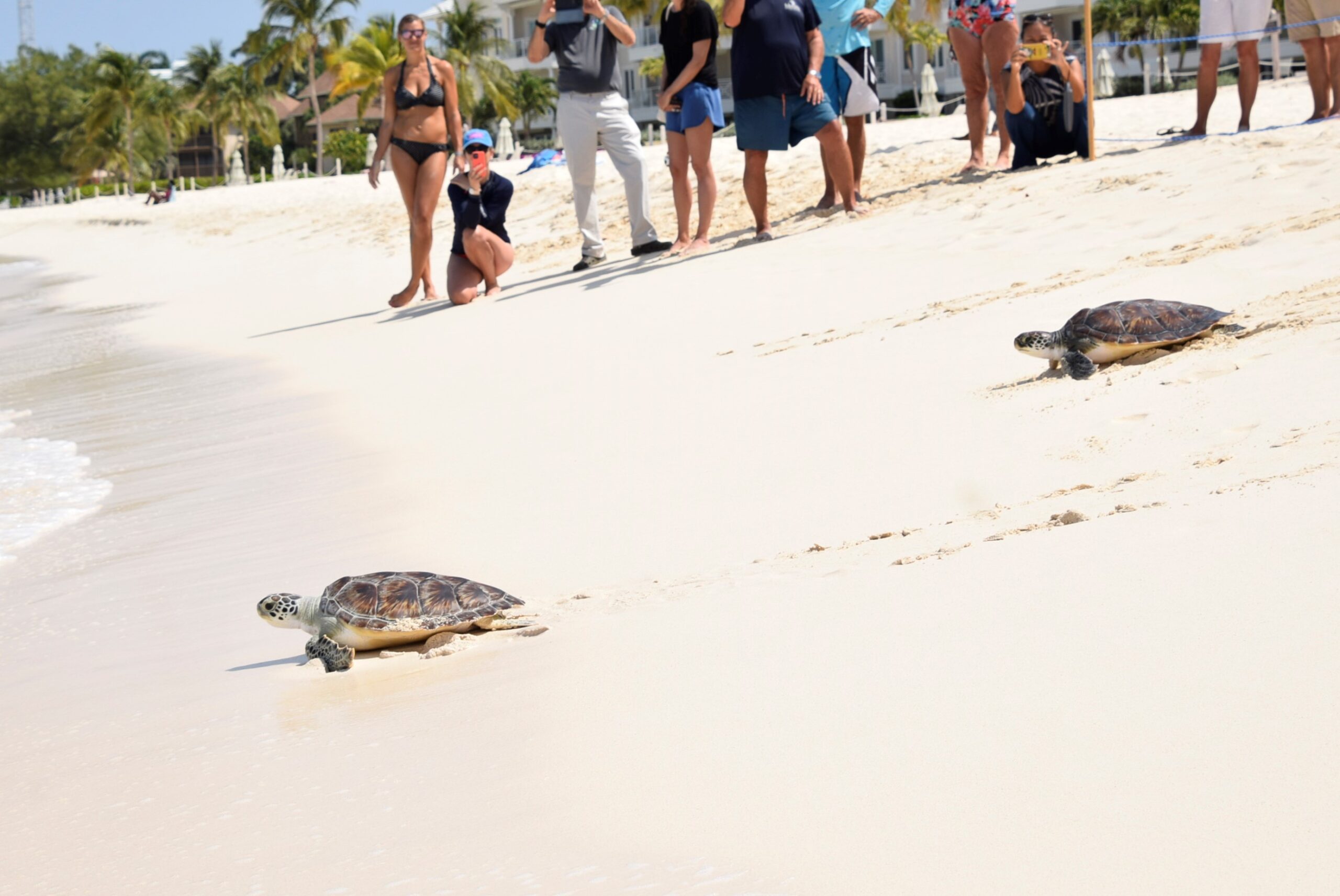 This year’s theme for Earth Month in the Cayman Islands is ‘Renew the Earth…Renew Cayman.” Since conservation is at the heart of Cayman Turtle Conservation and Education Centre (CTCEC), the Centre has been celebrating all month long with a range of activities and initiatives not only to celebrate Earth Month, but to actively help protect Cayman’s beautiful natural environment for future generations to enjoy.

The celebrations kicked off on Sunday 11th April with the Centre’s first annual Turtle Crawl 5k Walk Run. Over 130 people, including Deputy Governor Mr. Franz Manderson, got up early in the morning to make their way, whether jogging, running, or walking, all the way from the Centre along North West Point Road to the turn-around point at West Bay Dock and back again. All funds raised will go towards programmes that support the conservation of Green sea turtles in the Cayman Islands.

On Monday 19th April, the Centre organised a mangrove tree-planting at Barkers National Park that was streamed live on Facebook to educate the community on the importance of mangroves to our ecosystem. Mangroves are hugely important to the shoreline and the integrity of our natural environment and have been under attack from development in many areas of the world. Their root network acts as a nursery for many species of juvenile fish.

Geddes Hislop, Curator of Terrestrial Exhibits and Education Programs at CTCEC said: “One of the ways we can renew the planet is by planting more greenery. Our marine department at Cayman Turtle Centre has put together a mangrove propagation project and this was its first planting of the mangroves. Each one was planted in a specially prepared hole, to help get the baby mangroves off to a good start, because where they are there is a lot of wave action, and mangroves are our natural sea-wall.”

On Thursday 22nd April, the Centre hosted a special Earth Day turtle release at Governor’s Beach. A small group of spectators, including some young students from Hope Academy and their teachers, came to see the three yearling Green sea turtles being released. These turtles are part of the Cayman Turtle Centre’s “Head Start” release program, which gives turtles a ‘head-start’ in life by being hatched and raised to between one and three years old in the safety of the Centre, before being released into the wild at a size that greatly increases their chances of survival.

“These are a keystone species, and a keystone species benefits the environment in many ways. Green Sea Turtles are large marine herbivores, and control the algae on our reefs,” Mr. Hislop said, “They also mow down the seagrass beds. Fish, lobster, conch, and turtles depend on that environment. And here’s the cool thing – we don’t have to pay them!”

As part of an ongoing public education initiative, CTCEC also held two Animal Conservation Talk (ACT) Lunch & Learn sessions for civil servants this week, as part of the Earth Month schedule. The talks focus on what the Centre is doing to help conserve the marine environment and its successful captive breeding programmes.

Early on Saturday morning, 24th April, CTCEC crew members will be busy cleaning up West Bay’s Garvin Park as part of their annual commitment to keeping our community and natural environment clean by participating in the Chamber of Commerce Earth Day Clean-Up. CTCEC is a proud sponsor of the event and will be thanking participating individuals and companies by offering a 50% discount on admission and 20% off everything in the Splash retail store to anyone that arrives at the Centre wearing their 2021 Earth Day Clean-Up t-shirt on Saturday 24th April.