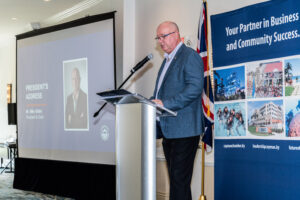 Mike Gibbs delivered his President’s Report at the Chamber’s AGM on Monday and took the opportunity to thank the membership, Council and Staff for the outstanding work that was achieved by the Chamber to support the membership and community during the ongoing pandemic.

The Chamber developed the Ready 4 Business webinar series, purchased bulk supplies of lateral flow tests, and issued regular communications and information utilising social media, eblasts and the website to keep members appraised of pandemic and business developments. The Council held regular meetings with Government officials and have agreed to host quarterly meetings with the Minister of Commerce. 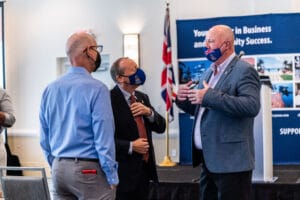 ‘’The Council and I did our best to gather the views of this diverse group and to advocate the issues that matter most to our members. Providing feedback on the reopening strategy and plan, access to labour, supply chain challenges, the increasing cost of doing business including health insurance costs, inward investment, the need for pension reform and planning concerns all featured during the meetings between Council Members and Government officials,’’ he reported.

He described the meetings with Cabinet and Caucus and other Government Ministers during 2021 as productive. In recent weeks, meetings have been held with the Minister of Financial Services & Commerce, the Hon. Andre Ebanks, the Minister of Health and Wellness, the Hon. 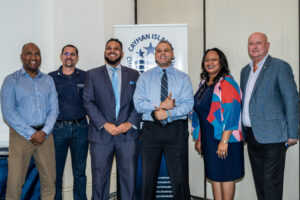 Sabrina Turner and the Deputy Premier and Minister for Labour and Border Control, the Hon. Christopher Saunders. The Council shared its views on various commerce-related matters, recommendations on amending the COVID testing protocols and discussed the backlog of work permit applications and the impact that this is having on the tourism, financial services, and other sectors. Labour matters, minimum wage review and pension reform also featured in the discussions with the Deputy Premier, who is responsible for labour and pension matters.

‘’We are encouraged by these meetings, and we look forward to building an even stronger relationship and partnership with the elected government,’’ said Gibbs. He also asked the Deputy Premier to include the Chamber on any review committees and focus groups that he creates to review labour and pension matters.

The Chamber’s Candidates Forums was identified as one of the highlights of the year. The Chamber’s conference room was converted into a television studio. Candidates were invited to the forums which were broadcast via television and on streaming video on the internet for the first time. By all accounts the forums were a great success and may influence the way the forums are conducted in future elections.

Gibbs thanked the candidates for participating, the television production company, Cayman Spaces, that set up the studio and streamed the forums on the internet, Foster’s, Dart, Health City Cayman Islands and Bodden’s for sponsoring the forums.

Membership engagement and communication featured prominently in the Chamber’s agenda in 2021. President Gibbs consulted with membership groups, industry associations and Past Presidents during the year either in person or video conferencing. He thanked the Past Presidents and industry associations for their willingness to engage and recognised Lynne Byles and her team at Tower Marketing for their outstanding work with managing the Chamber’s communications activities.

Health insurance plan options were researched during the year to address the increasing costs that are impacting members, particularly micro and small businesses with fewer than five employees as well as persons who reach retirement age who struggle to obtain a plan that is affordable with adequate coverage. Gibbs said health insurance plan proposals have been received and are being evaluated.

Gibbs said the Chamber has demonstrated that it can adjust to the ever-changing environment, but it must determine the true needs of its audience and the community it serves. He and CEO Wil Pineau attended the World Chambers Congress in Dubai in November where Chambers of all sizes gathered to discuss best practices, innovative projects and programmes and global business trends. It became evident that Chambers are changing their focus, programmes, and services to suit the needs of the communities in which they serve. He and the CEO developed a report that was presented to the Council following the conference. The report noted that the next generation Chambers must:

‘’While I truly believe that the Cayman Islands Chamber of Commerce has, and continues to embrace most of these strategies, we can do a better job. It is therefore my hope that the incoming Council will embrace the findings of the report so that our Chamber can continue to build on its strengths and embrace change as we seek to meet the needs of our members and our community,’’ he concluded.