Economy, education and pension reform top priorities for Chamber in 2021 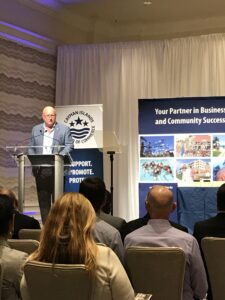 The economy, education, pension reform and health insurance as well as membership and industry engagement were all top priorities for the Chamber this year, President Mike Gibbs said at the Chamber AGM last week.  The Chamber’s relationship with Government would continue to be at the forefront of its advocacy agenda.

“We intend to continue our quarterly meetings with Cabinet, monthly meetings with WORC and meetings with other Government Ministries and Departments as necessary, to share your views and to provide feedback on key policy and public sector administrative and regulatory matters,” he confirmed

For the first time in Chamber history four industry associations will be represented on the Council, providing an invaluable resource in helping the country get its economy back on track.

“Many of the issues discussed by industry associations are similar in nature to the concerns of our members. We therefore feel strongly that the Chamber can serve as a coordinating body to identify the macro-socio-economic issues of common concern so that the private sector’s voice is unified on key topics,” Mr Gibbs explained.

Candidates’ forums would also be taking place shortly, continuing the Chamber’s practice leading up to the election of hosting a series of forums covering each of the 19 constituencies.

“It is also my intention to consult regularly with the Past Presidents. They are a tremendous resource with considerable expertise and wisdom. We will need them as we work together to restore and rebuild our economy this year,” he stated.

He said another focus for 2021 would be to elevate the status of the Chamber within the community.

“…people are still unfamiliar with the good work that we do and the value that we provide to our members and, by extension, the community. For example, our Training Centre, the Mentoring programme, Leadership Cayman, the Careers Expo and the island wide clean-up are just some of the ongoing programmes that are integral to the Chamber’s work,” he stated.

New faces were voted onto Council at the AGM including:

They will join President Gibbs, a consultant with Kensington Management Group, and an outstanding group of business leaders including:

Immediate Past President Woody Foster outlined the Chamber’s work behind the scenes in 2020 to support its members, elected and public sector leaders, the National Emergency Operations Centre, Public Health officials and the community during the Covid-19 pandemic.

Calling it “a team effort” Mr Foster said the Council, staff and himself, as well as dozens of volunteers, shifted focus from building businesses to securing Cayman’s borders, informing members, providing food to persons in need and keeping the community safe as the pandemic took a hold globally and the ensuing  lockdown that Cayman was placed under in 2020.

“Many of you contributed to these efforts. Leaders step up in times of greatest need and I would like to thank you all for your selfless service and contributions for our islands,” he stated, adding he thought that rebuilding Cayman’s economy and businesses would take time, but that he was confident that the Chamber could work with elected and government leaders as had happened so many times before in times of national and worldwide economic crisis to restore and rebuild the economy.

President Gibbs praised Mr Foster’s efforts stating that he had led by example.