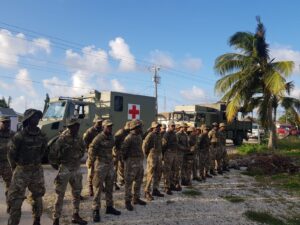 The Cayman Islands Regiment got some real, hands-on experience during its annual training camp, scheduled from Friday, 13 August through Sunday, 22 August, with the passage of Tropical Storm Grace over Grand Cayman on Wednesday, 18 August.

Acting Chief Officer in the Ministry of Home Affairs Michael Ebanks said, “This training exercise is a valuable component of what the Regiment means to Cayman and the value that it brings to the 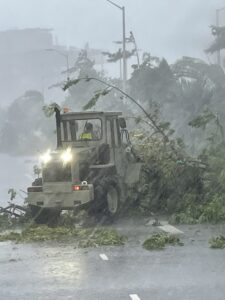 With Tropical Storm Grace approaching, training was stopped and the CI Regiment started actual preparations to deploy in response to the impending storm.

For the duration of the storm, two troops totalling 16 people were deployed to a Forward Operating Base at Clifton Hunter High School to provide support to the Eastern Districts; a Headquarters element was deployed to the Government Administration Building as part of the National Emergency Operations Centre; and the remainder of the Regiment established themselves at John Gray High School to provide support to the Western Districts.

Prior to the storm strike, the Regiment positioned personnel and distributed supplies to all open shelters across Grand Cayman to support shelter staff, and deployed chainsaw teams during the night prior to the main impact of TS Grace to clear downed trees from roads. 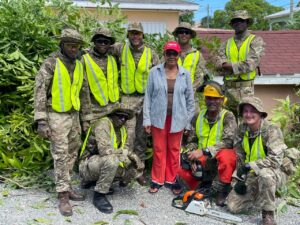 Once the majority of local access roads were open to traffic, the Regiment also deployed teams to the Botanic Park to assist with the clean-up there, and into many districts to help communities clean up and recover.

On Friday, 20 August and Saturday, 21 August the Regiment returned to the camp’s training element, by setting up field kitchens in West Bay and East End as a deployment exercise to simulate mass feeding as part of an Aid Distribution Point. 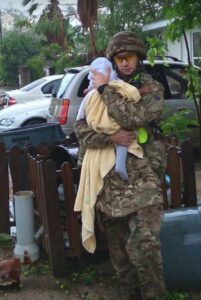 which of course is a critical element of our post disaster recovery plans, so to have the Regiment training and demonstrating how that training is put into action within the community is really what we are after.”

On hand for the exercise to see the CI Regiment in action, Minister for Home Affairs Hon. Bernie Bush said, “People can see the Regiment, their capabilities, what they are able to do, the equipment that they have in place, so it’s coming to come. It’s been there a very short time, but in the short time they’ve been there they are doing a very good job. What I’ve especially been impressed with was to see the teamwork and the discipline, and the camaraderie that has 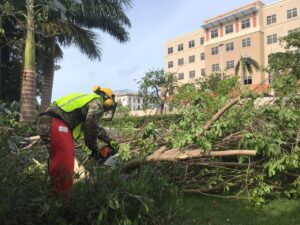 The CI Regiment will be recruiting at the end of this year, and welcomes all applicants who would like to join.

Further information can be found at https://www.exploregov.ky/ciregiment