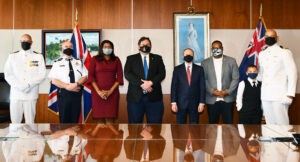 The first Commandant and Deputy Commandant of the newly established Cayman Islands Coast Guard received their commissions and letters of appointment. 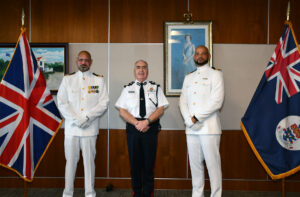 The two officers took their oaths of office before the Governor and the assembled attendees, prior to signing the documents that formalised their commissions and appointments. The Governor congratulated them on behalf of all present and noted the historical significance of the occasion. 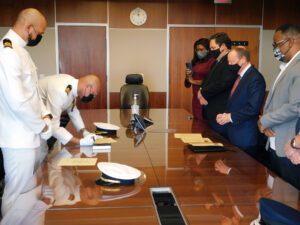 With his appointment, Cdr. Scotland is now charged with the command, superintendence, and direction of the Coast Guard as per Section 8 of the Coast Guard Act (2021), and for ensuring that the maritime safety and security of the nation are preserved.

As Deputy Commandant, Lt. Cdr. Anglin will assist Cdr. Scotland in ensuring that the strategic and operational objectives of the Coast Guard are delivered in a timely and professional manner.

“Both Lt. Cdr. Anglin and I are proud and humbled by the trust and confidence reposed in us, and pledge to continue doing our best to build the Coast Guard into an entity that the people of the Cayman Islands will always be proud of,” Cdr. Scotland said.