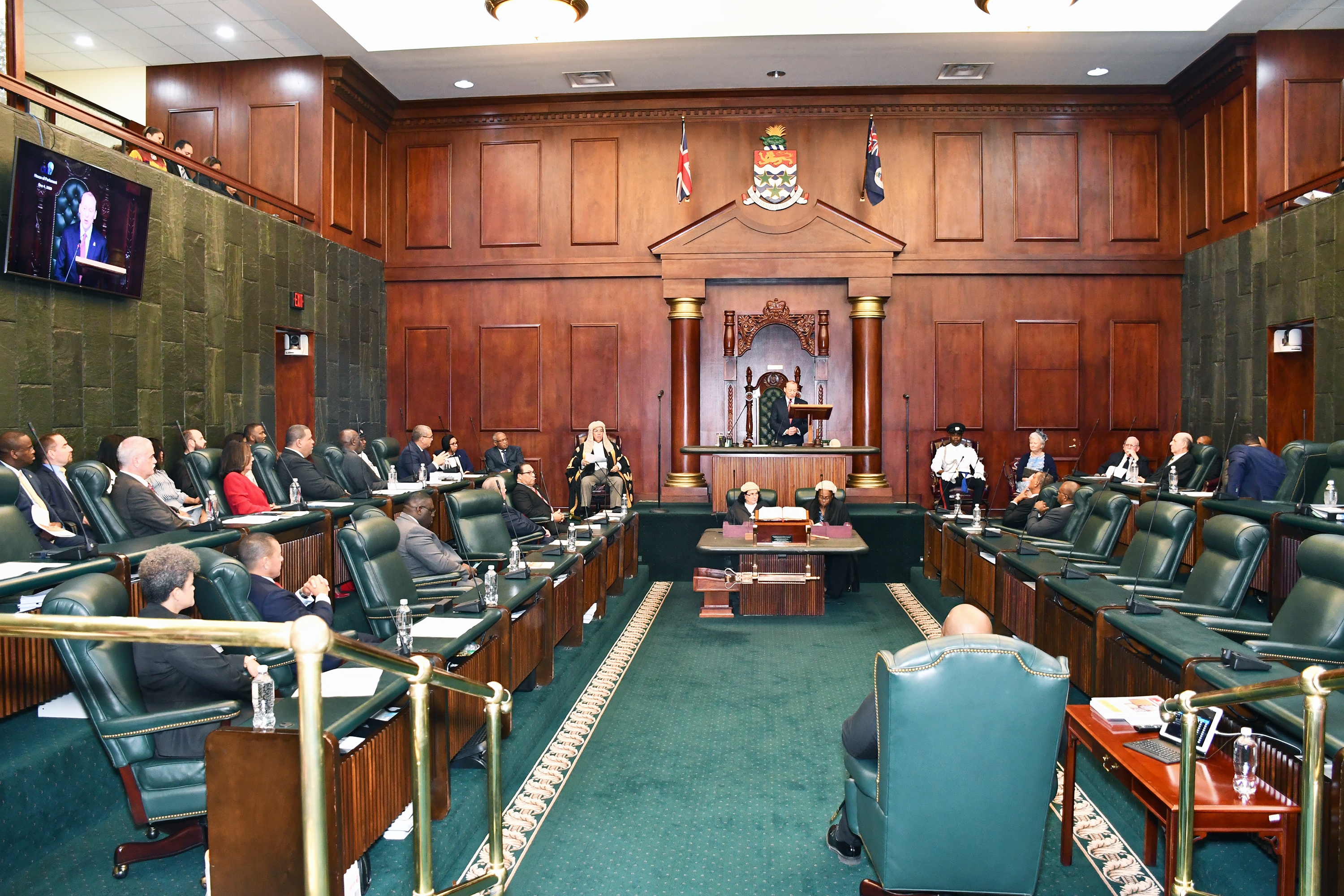 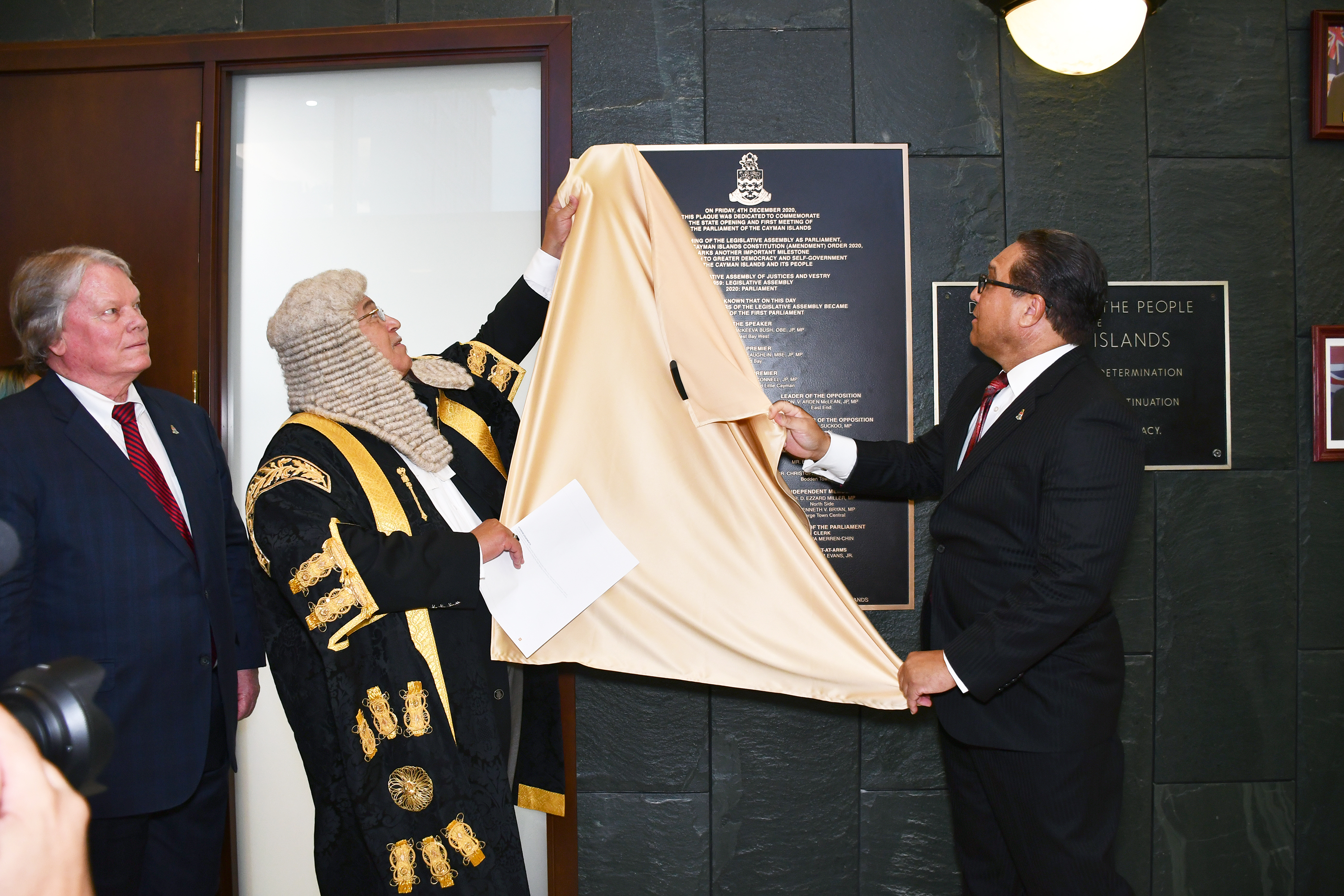 Marking yet another significant step in the Cayman Islands’ democratic progress, the Legislative Assembly’s transition to a House of Parliament was celebrated at an historic ceremony on Friday, 4 December 2020.

The Cayman Islands’ unicameral legislature is now only the third United Kingdom Overseas Territory (OT), and the first among Caribbean OTs, to be designated as a Parliament, behind Bermuda and Gibraltar.

The change is commemorated in the new name blazoned across the top of the entrance to the iconic building in central George Town and three plaques unveiled at the state opening. All of these served to indelibly engrave the change in the minds of the Cayman Islands’ people.

The event brought the curtains down on the “Legislative Assembly” that was “born” on 4 July 1959 when the Cayman Islands got its first written Constitution. The move ushered in 61 years ago, installed the Islands’ house of legislature, which in turn had replaced the historic bicameral Assembly of Justices and Vestry functioning continuously for 128 years, from 31 December 1831.

On 11 November 2020, the UK Privy Council had formalised the move from LA to Parliament as one of several changes contained in the Constitution (Amendment) Order 2020.

To mark the occasion, the Cayman Islands received congratulatory messages notably from the Prince of Wales, the UK Prime Minister, Mr. Boris Johnson and Lord (Tariq) Ahmad of Wimbledon as well as a number of heads of regional governments.

His Excellency the Governor, Mr. Martyn Roper, presented the amended Constitution Order to the Premier, Hon. Alden McLaughlin and warmly congratulated the people of the Cayman Islands on their evolving democratic history.

The Governor said, “As UK Ministers said at the recent Joint Ministerial Council virtual meeting, the constitutional talks with Cayman were a role model for how such talks should be conducted and one other Territories could follow.

“The support the UK provides is part of the strong, mature and constructive partnership that exists between our two Governments. I will continue to work hard to nurture that relationship, which brings mutual benefits.”

Addressing the new Parliament for the first time, the Premier said, “The change of the Legislative Assembly to become The House of Parliament is symbolic of the United Kingdom’s recognition of our growing maturity. It also reflects on our achievements as a people and as a nation.”

All 19 Cayman Islands’ new MPs and the two ex-officio MPs received from the Speaker of the Parliament, Hon. McKeeva Bush, symbolic keys to the Parliament crafted in Caymanite by local artist Mr. Horacio Esteban.

They also received from the Premier celebratory personal copies of a document outlining their changed status to Members of Parliament from MLAs, along with a copy of a specially commissioned painting of the Parliament building by local artist Mr. Gordon Solomon.

The formal ceremony was followed by a reception for the people which included refreshments, live entertainment by Synergy and an opportunity to learn about Cayman Islands’ constitutional history at an exhibit at Constitution Hall.

The event was choreographed by Celebrate Cayman, the Offices of the Premier and the Speaker. The Cabinet Secretary thanked all who had contributed to make the event a success.