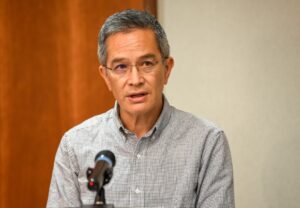 The Chief Medical Officer, Dr. John Lee, today issued a COVID-19 video update in which he put rising numbers of COVID-19 cases in the context of increased testing throughout the community including use of lateral flow.

He noted that a significant number of these positives were first identified via lateral flow testing.

Dr. Lee said, “There are also a number of community positives over the three-day period for Friday, Saturday and Sunday. This total is 669, which obviously is a large number.”

He explained that the three-day total of 669 positives included over 200 reports of positive results from lateral flow tests. Since the start of the lateral flow test programme in the Cayman Islands, Dr. Lee noted, 832 positives had been reported via the use of the self-administered tests.

The Chief Medical Officer took the opportunity to reveal the Cayman Islands’ overall prevalence rate of COVID-19 infection as it currently stands is at 3%.

He said, “Our active cases are now 2,118, which gives us a prevalence – which means the number of people suffering or having contracted SARS‐CoV‐2 being around three percent across the Islands.”

He said the lateral flow test policy would pick up many positives that would probably not have been detected otherwise.

“As we introduce the policy, we’re going to pick up an awful lot of positives at the start and so I very much appreciate continued cooperation with this and following the policy,” Dr. Lee said.

The Chief Medical Officer explained that the end goal of the lateral flow testing policy is to curtail community spread.

Dr. Lee also put local hospital admissions into perspective, noting that while there have been new admissions there have also been discharges, and no persons requiring use of a ventilator.

“As far as hospital admissions are concerned, we currently have 14 people in the George Town hospital of the HSA, currently five of whom are needing extra oxygen but there is no one on a ventilator and no one needing enhanced respiratory support,” he said. “I think it’s important to understand that not only are people being admitted but they’re also being discharged. So, since Friday there have been 14 people in total admitted but at the same time, there has been 12 people that have been discharged. And that’s what you would expect as people get treated, they get better and they’re able to go home again.”

For further COVID-19 information and resources, Dr. Lee also directed people to www.gov.ky/coronavirus; specifically for information on the national lateral flow test policy to https://www.exploregov.ky/lft-policy; and to ensure they report positive results at www.exploregov.ky/report-covid19-result .

He said, “There’s extensive information about how the lateral flow policy should be used. There’s infographics and other information helpful for both individuals and organisations in implementing the policy.

Dr. Lee’s full video update may be viewed at https://youtu.be/nbF7aNw-ImM