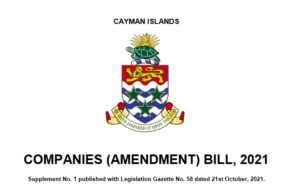 Amendments to attract and maintain restructuring and insolvency business in the Cayman Islands are contained in the Companies (Amendment) Bill, 2021. These are some of the bill’s key amendments.

The bill will be presented to Parliament by the Minister of Financial Services and Commerce. ­­­