All forums will be streamed live to our Facebook or YouTube channels from 7:15pm to 9:30pm and posted to our website. Cayman Life TV, Government Information Services (GIS), Cayman Marl Road, ICCI-FM, and Radio Cayman will broadcast the forums. All forums will be posted to the Chamber website for constituents to view at any time.
If you missed the Bodden Town West forum and would like to watch the full broadcast please click here
Wednesday, 17th March
7:15 - 9:30 p.m. 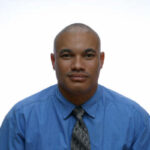 Mr. Vincent Frederick, formerly an H/R Manager of thirty-years has a proven track record serving in various private and public leadership roles. He portrays true, honest, and open leadership skills and continues to work tirelessly day and night for all the people.

He has served as an active member of the Health Insurance Commission, the Water Authority Board, and recently on the National Housing Development Trust.

He has remained an active  and committed member of the Bodden Town Heritage Day Committee and has served as President on two past occasions.

In addition, he is also the Chairman of the New Self-Help Community Foundation that focuses predominantly on youth development.

The three most important local issues:

The three most important national issues: 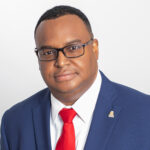 Chris Saunders and his family live in his home constituency of Bodden Town West for the past 38 years.

Since being elected in 2017, Chris brought the most private member motions. Of the 19 motions brought, 14 passed unanimously, three were withdrawn to be negotiated with the Government, and 2 were rejected. Chris also seconded 9 private members motions where 5 were passed.

Chris is not afraid to tackle the uncomfortable issues as demonstrated by his work on the Public Accounts Committee. Chris believes that we must have those uncomfortable conversations if we are to move our country forward.

Chris is a CPA and has worked in various Government Departments including Lands and Survey; Treasury; Internal Audit and the Office of Auditor General.

Chris has over 20 years of Senior Management experience in the Private Sector where he held senior management positions in Banking and Telecommunications.

Shortly after leaving university, Chris volunteered to teach at the Prison and has maintained a passion for education. Prior to being elected, Chris also volunteered with Meals on Wheels.

Chris is a former Director of the Health Services Authority and a former member of the Immigration Business Staffing Plan Board.

In his spare time, he is an avid reader, scrabble, chess, and dominoes player.

In standing for re-election, Chris does so in the knowledge that he is independent and not beholden to any special interest groups but rather to you the people and will continue to work tirelessly to uplift all Caymanians.