All forums will be streamed live to our Facebook or YouTube channels from 7:15pm to 9:30pm and posted to our website. Cayman Life TV, Government Information Services (GIS), Cayman Marl Road, ICCI-FM, and Radio Cayman will broadcast the forums. All forums will be posted to the Chamber website for constituents to view at any time.
If you missed the George Town Central forum and would like to watch the full broadcast please click here
Monday, 29th March
7:15 - 9:30 p.m. 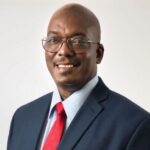 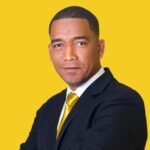 Kenneth Vernon Bryan was born July 12th, 1980 at the George Town Hospital in Grand Cayman to parents Vernon McAlister McField and Donna Teresa Bryan, who lived on Shedden Road, in the heart of what is now the of George Town Central constituency.

A committed family man, Kenneth has been married to his wife, Michele, for 12 years. They have two daughters, Renee age 12 and Sienna age 10.

He has a degree in Business Administration from the University College of the Cayman Islands.  He is also certified as a Backpack Journalist by the Poynter Institute of Media in Tampa. He also has experience as a civil servant, having entered the workforce as a fire officer in 1997.

He was first elected to the Legislative Assembly (now Parliament) in 2017, when he ran as an independent candidate in George Town Central and has proudly represented that constituency since then. He is also a member of the Commonwealth Parliamentary Association and participated in many conferences around the world, including being a proponent of taking action to address climate change. Kenneth also served as a member of the Cayman Islands Youth Parliament Committee.

Prior to his political life, Kenneth was known for his time as TV reporter with Cayman 27. He also served as the Political Assistant to the Premier of the Cayman Islands from 2013-2015.  He was also the founder of the “Grasp Your Future” voting registration drive in 2013 that helped register over 1,000 young people to participate in the electoral process. In his free time, Kenneth speaks with at-risk youth in various schools, most notably with the “Boys to Men” program.

A firm believer in putting people first, Kenneth’s 2021 campaign slogan is “Together We Still Can, Make Cayman Better”.  He says the country must create long-term plans for the various issues we face, like education, tourism, economic growth, just to note a few.

He says his strengths include being firmly connected to the community and being a persistent individual who never gives up and he will continue to use that quality when representing the people of George Town Central and the wider Cayman Islands.

Top 3 national issues that Kenneth intends to address if elected:

Top 3 constituency issues that Kenneth intends to address if elected: