All forums will be streamed live to our Facebook or YouTube channels from 7:15pm to 9:30pm and posted to our website. Cayman Life TV, Government Information Services (GIS), Cayman Marl Road, ICCI-FM, and Radio Cayman will broadcast the forums. All forums will be posted to the Chamber website for constituents to view at any time.
If you missed the West Bay North forum and would like to watch the full broadcast please click here
Tuesday, 23rd March
7:15 - 9:30 p.m. 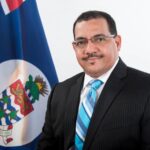 Mr. Rolston ‘Rollie’ Anglin attended the Sir John A. Cumber Primary School, Cayman Islands Middle School and graduated from the Cayman Islands High School and Sixth Form.  He then earned a scholarship from PricewaterhouseCoopers (formerly Price Waterhouse) and graduated with honours from The Ohio State University.  He passed all parts of the certified professional accountant (CPA) exam on his first attempt.  He worked in the PwC Cayman Islands and New York offices from 1995-2000 principally on hedge fund, mutual fund, banking, trust, trust company and captive insurance audit engagements.

In April 2000 he resigned from PwC and ran for elected office.  He was successful in three general elections and served with distinction as a Member of the Legislative Assembly (now Parliament) from 2000 until 2013.  From 2000-2005 he was a government backbencher, from 2005-2009 he was a member of the opposition and from 2009-2013 as a Minister in the Cabinet (and Deputy Premier) of the Cayman Islands.  During his tenure in the Legislative Assembly Mr. Anglin was also key spokesperson on finance, financial services, education, commerce and immigration matters. 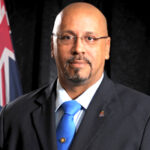 Mr. Bush has a sports science degree from Carnegie which is a part of Leeds University. He spent 7 years at air traffic control. He took a major pay cut to join the late Winston Skinner to start to build the sports office. He managed KFC for a year in 87 but left for school in the UK. After leaving the sports office in 2000 he was the operations manager for Cayman imports and Hurleys. He then went on to manage and turn around the Texaco Xpress Lube business. He went on to then become the director of the pirates week festival which had become stagnant in the view of many. He brought it back for it to become the biggest yearly event working with international entities such as Red Bull, NASA, and the Gaspirilla pirates.

Mr. Bush was the former president of the athletic association which was deep in debt with many problems. When he moved on he had seen to have over 12 athletes go off on scholarships. He was president of the West Bay Primary School PTA for 8 years and founded the primary school girls football competition. Mr Bush was also the architect and manager of the u17 junior girls football team that to this day was rated by FIFA higher than any other Cayman team male or female.

TOP NATIONAL ISSUES TO BE ADDRESSED, IF ELECTED:

TOP CONSTITUENCY ISSUES TO BE ADDRESSED, IF ELECTED:

“I love people, I care about people. I love my country and I care about my country. That’s why I have been in my community for over 40 years. When I lost the elections I didn’t lose my passion for my people or my country. I am running to ensure that our environment and our people are protected from these special interest groups that have plagued us for the past 24 years progressively making life harder for most of us who call this our home. I am running to do all that is necessary to preserve Cayman for our young people and the generations to come. Cayman has so much to offer, it should never be that our children have to look elsewhere to make a living. It is time we ensure that our own Caymanians can share in the wealth that this country has given to so many. It is time that Caymanians be the largest benefactors of the Cayman dream. This is why I am running.”