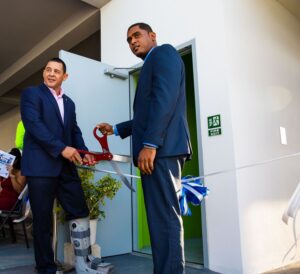 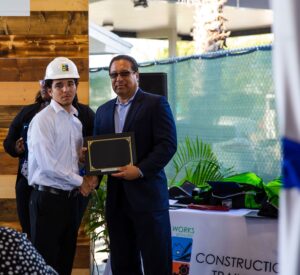 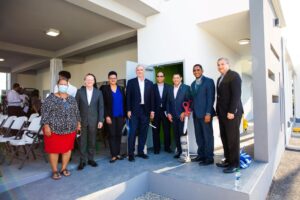 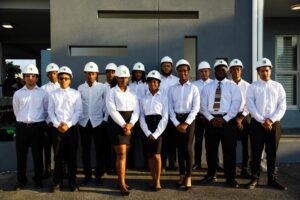 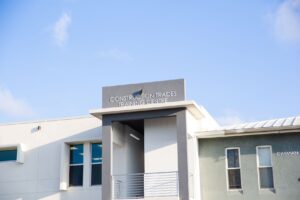 The two-story training facility, which comprises classrooms and an area for practical training will accommodate the various programmes offered by the Public Works Department including the part-time and full time apprenticeship programmes, full time internship programmes as well as a partnership programme with the Cayman Islands Further Education Centre.

Minister of Commerce, Planning and Infrastructure Hon. Joey Hew in his remarks stated that PWD had taken on the responsibility to promote the careers of young Caymanians, not only through mentorship of interns in high schools but by technical training which will lead to internationally recognised certifications. “The apprenticeship programme which has grown over the past three years will create a medium through which young Caymanians students can develop skills in a variety of technical and vocational areas important to nation building”.

Minister Hew further said, “With the scarcity of locally qualified job applicants to perform some specialised roles, it is important that we develop our workforce and empower young Caymanians to take their place in society. Given the economic climate and the importance of the development and construction sector to the Islands economy, the opening of the facility is quite timely.

Acting Director at the Public Works Department, Troy Whorms expressed gratitude to the instructors and mentors from the Facilities section of PWD and members of the private sector who contributed to the training of development of the apprentices. He also commended several persons and organisations that contributed to the realisation of the new building including the project management team at PWD, AMR Consulting Engineers and Corporate Electric Limited.

Mr. Whorms noted, “I started my career in the civil service at the Public Works Department as a summer intern and I am now leading the Department that got me to this point in my career. This is a testament of what is possible with PWD’s training programmes and I look forward to supporting the next generation through training and development offered by the Department”.

Several past and current apprentices attending the event were presented with certificates and special awards.

PWD graduate and apprentice for the year 2017-2018, Zeb Bush said the apprenticeship programme was very beneficial to him as he received hand on experience and was able to put into practice what he learned in the classroom. “Not only is the programme locally accredited but it is also internally recognised as well. Upon completing the programme, I was immediately employed by firm Arch and Godfrey where he got the opportunity to work with seasoned construction managers and civil engineers”, he emphasised.

In attendance at the ribbon cutting ceremony were His Excellency the Governor Martyn Roper, Premier Hon. Alden McLaughlin, Deputy Governor Hon. Franz Manderson, Minister of Education, Youth, Sports, Agriculture and Lands, Hon. Juliana O’Connor-Connolly as well as other Ministers of Government, Parliamentary Secretaries senior civil servants as well as parents and guardians of the apprentices.