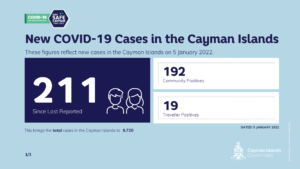 Chief Medical Officer (Interim) Dr. Autilia Newton reported 211 new cases of COVID-19, 19 in travellers and 192 from the community on Wednesday, 5 January. Public Health reported 538 PCR tests were conducted since the last report on Tuesday, 4 January of which 108 were positive. One hundred and three positive lateral flow tests (LFTs) were also reported during this period. 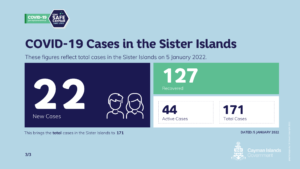 In addition, four COVID-19 patients were hospitalised in the Cayman Islands as at midnight on Wednesday, 5 January.  There were no new admissions during this period. 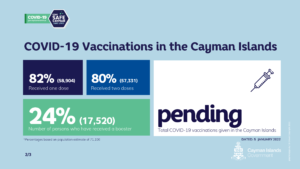 Additionally, 17,520 people (representing 24% of the total population) had received a third or booster dose up to that point.