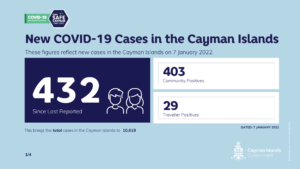 Chief Medical Officer (Interim) Dr. Autilia Newton reported 432 new cases of COVID-19, 29 in travellers and 403 from the community on Friday, 7 January 2022. Public Health reported 1,007 PCR tests were conducted since the last report on Thursday, 6 January, of which 301 were positive. One hundred and thirty-one (131) positive lateral flow tests (LFTs) were also reported during this period.

There have been 89 confirmed cases of the Omicron variant in the Cayman Islands to date, meanwhile the number of probable Omicron cases reached 1,073 on Friday, 7 January.  The number of reported active cases stood at 3,470 with 3,221 of those being linked to community transmission. The percentage of the Cayman Islands population who are reported COVID 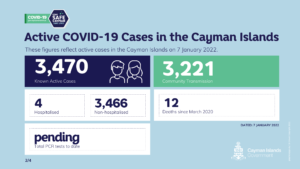 positive currently stands at 4.88 percent. The total number of cases recorded in the Cayman Islands since the start of the pandemic stood at 10,618 at the same time.

In addition, four COVID-19 patients were hospitalised in the Cayman Islands as at midnight on Friday, 7 January. There was one new admission during this period. 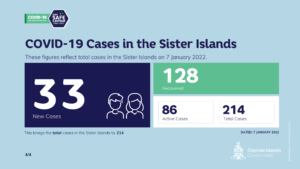 Additionally, 17,784 people (representing 25% of the total population) had received a third or booster dose up to that point. 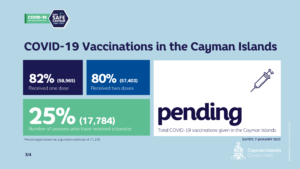