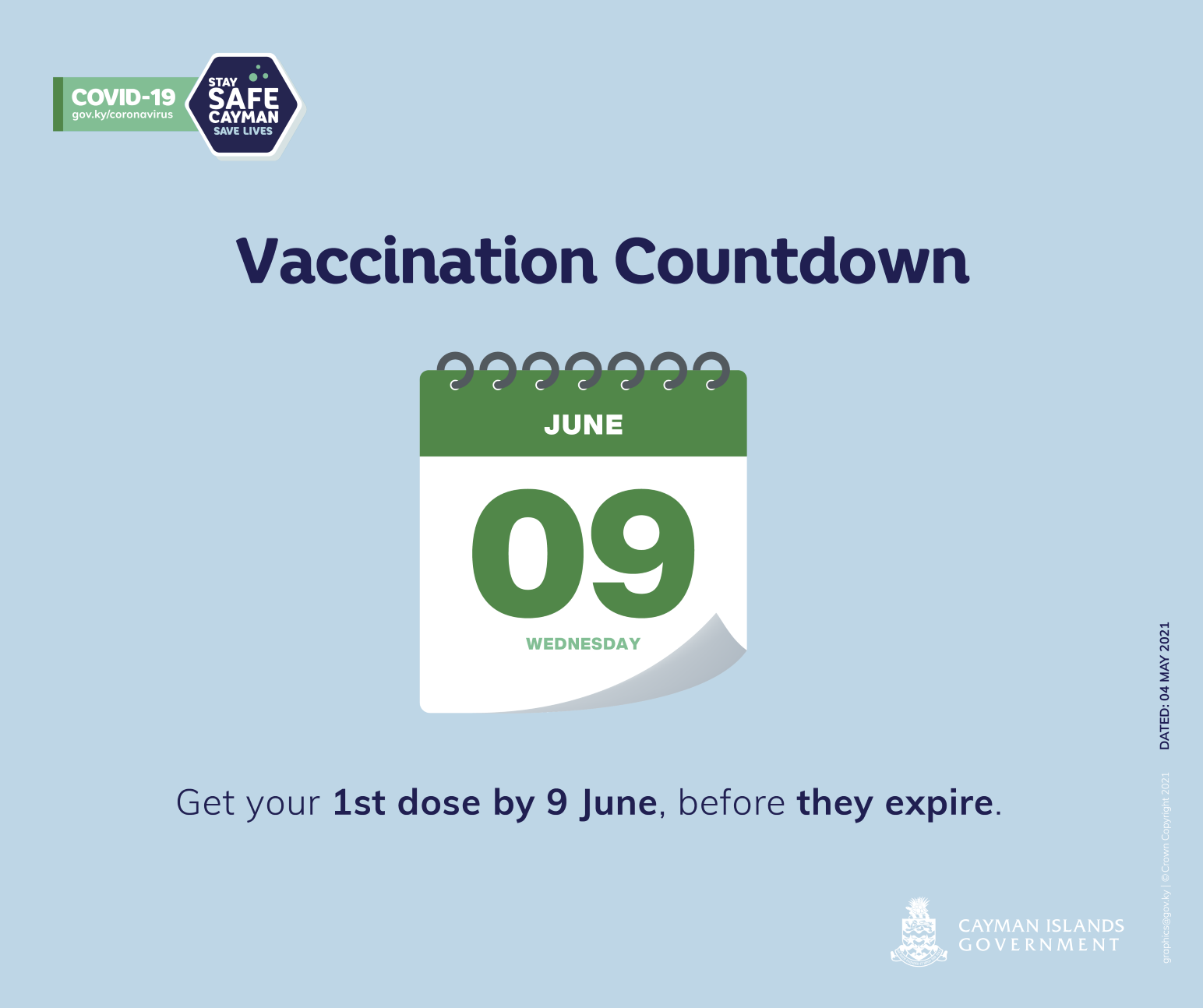 At the COVID-19 press conference today, Wednesday 5 May 2021, Premier Hon. Wayne Panton and members of Cabinet urged Cayman Islands residents who have not yet been vaccinated to get their first vaccination before 9 June, as existing vaccine stocks expire on 30 June.

Premier Panton announced the new PACT government would take a conservative approach to the potential reopening of borders, which is heavily dependent on the rate of uptake of the COVID-19 vaccine by local residents.

Mr Panton said adequate vaccine protection for the population is essential to our future potential to reopen our borders and restart tourism. He said a target of 70% of the total population is “do-able” and that the country is “within striking distance of this now”.

Hon. Minister for Health & Wellness Sabrina Turner reiterated the Premier’s call for those residents who have not yet been vaccinated to do so before 9 June. She acknowledged that the local public health workers have done an incredible job throughout the crisis, and now it is up to the community to ensure the population is protected moving into the future.

Minister Turner explained that Cabinet will be considering removing the requirement for returning residents to have a PCR test 72 hours prior to travel, once they can show they have been vaccinated within the prior two weeks (this applies to those vaccinated locally only). The final decision on this is dependent on the ongoing uptake of the vaccine.

Four Cabinet Ministers, including Hon. Minister of Tourism & Transport Kenneth Bryan will receive their first vaccinations on Saturday, 8 May at 10am at the vaccination clinic at the Owen Roberts International Airport. The public is invited to attend and urged to join the Ministers in receiving their vaccinations.

Minister Bryan announced a prize raffle for all residents getting their vaccine shots between 8 May and 8 June, offering prizes from tourism industry partners including Cayman Airways tickets, staycations, dinner gift certificates, and free entry at local attractions as incentives to further encourage more people to get vaccinated before 9 June.

Minister Bryan announced the continuation of the tourism worker stipend of CI$1,500 per month beyond the current expiration date of 30 June. No new end date for the stipend programme was announced, but Minister Bryan confirmed that the payment would be re-evaluated once the timeframe for safe border reopening was established.

Hon. Minister of Finance Christopher Saunders revealed that Government is doing better in 2021 than in 2020 with respect to Surplus results for the Entire Public Sector. Combining the Central Government’s Surplus of $196.2 million with a $6.4 million net Surplus from Statutory Authorities & Government-owned Companies (SAGCs), the Entire Public Sector (EPS), had a Surplus of $202.6 million to 31 March 2021 which was $43.1m better than budget and $25.4m better than 2020.

Minister Saunders explained that the Government’s Debt-to-GDP ratio is a very favourable 5.1% – amongst the lowest in the world and affirmed that the Government will refrain from borrowing for as long as possible but, this may become necessary if the border remains closed and the economy is not operating at its full potential.

Minister Saunders said there will be no cuts in domestic spending and the government will be looking at ways to encourage funds to remain in the domestic economy. He said motivating more people to support local farmers and being more energy efficient would help to reduce the amount of monies sent overseas to buy agricultural and fuel products.

Chief Medical Officer Dr. John Lee reported that 235 COVID-19 tests have been carried out since this was last reported on Tuesday, 4 April 2021. All were negative.

Public Health continues to encourage the community who have not yet been vaccinated to come forward before 9 June 2021 to meet the expiration date of the last scheduled delivery of vaccines.