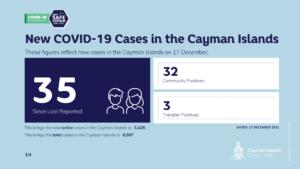 Public Health has amended the epidemiological day to be considered as midnight to midnight to simplify reporting processes and to present findings for complete days.

On Friday, 17 December Chief Medical Officer (Interim) Dr. Autilia Newton reported that 760 PCR tests were conducted from midnight 15 December to midnight 16 December. The Public Health Department reported an additional 35 positive results from tests, three in travellers and 32 from the community.

To date, there have been 4 confirmed cases of the Omicron variant found in the Cayman Islands. 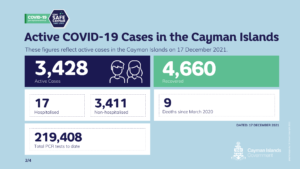 These results left the number of active cases of COVID-19 in the Cayman Islands at 3,428, as of midnight on 16 December. The total number of cases recorded since the start of the pandemic stood at 8,097 at the same time.

In addition, 17 COVID-19 patients were hospitalised in the Cayman Islands as at midnight on Thursday 16 December.

The Public Health Department also confirmed that on Thursday, 16 December the total positive lateral flow tests since the introduction of the lateral flow test programme in the Cayman Islands, reached 2120.  These are included in the total 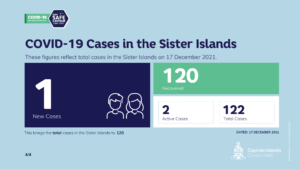 positive numbers given above. 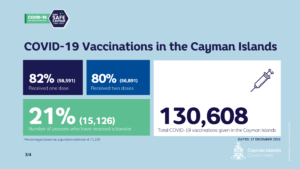 Additionally, 15,126 people (representing 21% of the total population) had received a third or booster dose up to that point.