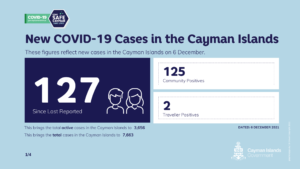 At 8 a.m. on Monday, 6 December Chief Medical Officer Dr. John Lee reported that 1,777 PCR tests had been conducted since 8 a.m. on Friday, 3 December. The Public Health Department reported 127 positive results from these tests, with two in travellers and 125 coming from the community.

These results brought the number of active cases of COVID-19 in the Cayman Islands to 3,656 as at 8 a.m. on Monday, 6 December. The total number of cases recorded since the start of the pandemic stood at 7,663 as at the same time.

Up to that point, 4,309 people in the Cayman Islands were in isolation either in 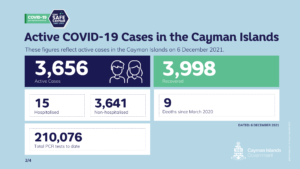 Government isolation facilities or at home. There were 15 COVID-19 patients hospitalised in the Cayman Islands at 8 a.m. on Monday, 6 December. Officials also noted that there have been two deaths from COVID related causes since the last report. 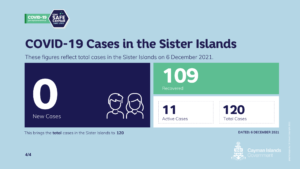 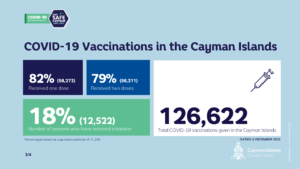 Additionally, 12,522 people (representing 18% of the total population) had received a third or booster dose up to that point.