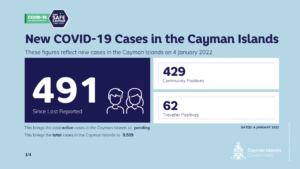 Chief Medical Officer (Interim) Dr. Autilia Newton reported 491 new cases of COVID-19, 62 in travellers and 429 from the community on Tuesday, 4 January. Public Health reported 1674 PCR tests were conducted since the last report on Friday, 31 December 2021, of which 271 were positive. Two hundred and twenty positive lateral flow tests (LFTs) were also reported during this period. 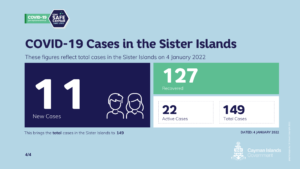 In addition, six COVID-19 patients were hospitalised in the Cayman Islands as at midnight on Friday, 31 December.  Of these, three patients were newly admitted. 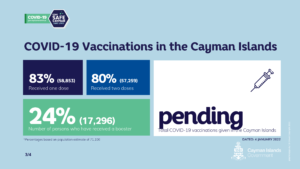 Additionally, 17,296 people (representing 24% of the total population) had received a third or booster dose up to that point.