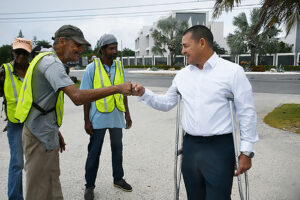 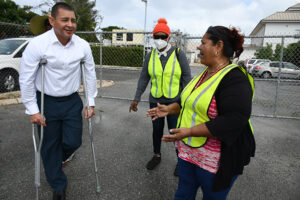 The scaled back site visits took in two areas of George Town, namely Windsor Park and the Broadwalk on South Sound Road. At the former, NiCE workers cleared roadside verges, cut bush and cleared fly-tipped refuse from the neighbourhood. Accompanied by the Acting Director Public Works Department, Mr. Troy Whorms; the Deputy Chief Officer of Ministry of CPI, Mrs. Leyda Nicholson-Makasare; and NiCE Project Manager, Mrs. Lois Kellyman; Minister Hew spoke to the teams and thanked them for a job well done on behalf of his Ministry and the general public. Minister Hew also asked workers about their experiences on the programme.

“Seeing the quality of their work, it is clear that many NiCE workers take pride in ensuring that the community can enjoy well-maintained roadsides, parks, cemeteries and beaches,” he said.

“Each year that we have run the programme, the Ministry has tried moving it forward with the help and support of our partners including WORC, Department of Environmental Health, National Roads Authority, Mosquito Research & Control Unit and Public Works Department. We hope to expand NiCE, in the future, by working in partnership with other agencies for longer periods of time and using it as a hybrid work initiative, including elements of a second-chance, rehabilitation or an on-the-job training.”