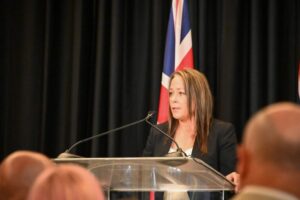 Dart’s president of business development Jackie Doak made the the case for a national Environmental Management Framework to “provide clear guidance on how land can be developed, managed and protected” in the future.

Doak, speaking at the Chamber of Commerce Legislative Luncheon Thursday, argued the lack of a national plan created confusion and contributed to “unnecessary polarisation” in the community. 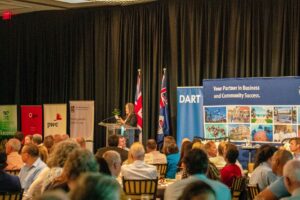 She said the divisions within Cayman, perhaps, seem more intense than they actually are, arguing that the majority of the community has the same goal of sustainable development for the islands.

She said there are highly sensitive habitats in Cayman that need to be protected, but also land that could be developed to the benefit of all.

Doak added that a management framework would help create greater clarity around the land that falls between those two extremes.

“We are not just a developer in the Cayman Islands, we are committed to the sustainability of these islands,” she said.

“We believe that an environmental management framework would help balance the country’s environmental, social and economic interests.”

Addressing questions raised in the community over “who are we developing for?” she said Dart is also asking, “who are we investing in?”

She said the company is investing in Cayman’s future and providing opportunities for “shared prosperity” in the community.

Doak added that Dart takes a sustainable approach to development, considering future as well as current generations. She said government and the private sector need to work together in the best interests of the islands, and Dart is prepared to play its part.

Though the company had been financially impacted by the pandemic, she said it was committed to Cayman long term, and had been and would continue to be an economic driver for the country in recessionary times.