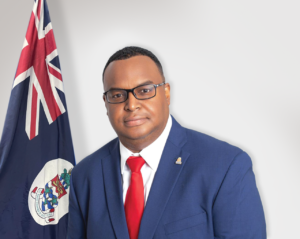 Deputy Premier and Minister of Finance Hon. Chris Saunders issued a video statement today (Wednesday, 26 January) to reassure the public about the Government’s enquiries into a potential bond issue.

He said, “Refinancing Government debt and borrowing to finance much-needed capital projects is exactly what it says on the label.  Nothing more. It has absolutely nothing to do with borrowing to fund the Government’s day-to-day expenses or the creation of a welfare state as claimed.”

Noting that the PACT Government is “committed to being investors in our people and our infrastructure,” the Deputy Premier said, “This Government is now investigating refinancing options, including but not limited to a bond offering, to ensure we are paying less interest every year and to invest in our Islands’ long-term future.”

Minister Saunders outlined several urgent projects that are awaiting completion. He said: “Regardless of how the borrowing is structured, any funds raised will enable vital infrastructure projects such as the completion of the Long-term Mental Health Facility;  the East-West arterial and other new roads; a new undersea data cable to ensure our continued connectivity to the world; and finally completing the delayed and mismanaged high school construction project, which was started over 14 years ago by the Opposition.”

He further explained that funds raised through borrowing would also be used to provide equity injections to vital public services.   Chiefly, the Health Services Authority, Cayman Airways, and a fund to a reverse mortgage product to allow elderly homeowners to use the equity in their homes to support themselves now in their time of need.

Minister Saunders said, “The idea of reverse mortgages is to reduce government pay-outs for social assistance to the elderly. It is not fair or sustainable for the government to be assisting the elderly when they are equity-rich but cash poor. Letting our seniors access their cash when they need it now, means they can live in dignity without being a strain on the public purse.”

He revealed that funds raised would also benefit the National Housing Development Trust and the Cayman Islands Development Bank to support Caymanian homeownership.

Minister Saunders said, “This Government is committed to increasing homeownership amongst Caymanians.  To this end, $28million of borrowing will be used as an equity injection for the National Housing Development Trust and the Cayman Islands Development Bank to assist in the building and financing of these homes. While the Opposition may not support this initiative, we as a Government recognise that shelter is a basic human right and homeownership is a dream for many Caymanians.”

He outlined the plan further, saying, “To this end, we are also exploring the possibility of underwriting loans above 30 years to give our young people an opportunity to access loans where the monthly repayment is affordable. Once they have enough equity built up, they can access funding from the traditional banks. Again, while this may not be an initiative that the Opposition supports, we are committed to our young people owning a piece of the Cayman rock.”

The Deputy Premier pointed out the “hypocrisy” of the Opposition regarding the refinancing of existing public debt and future borrowing, given the prior administration’s borrowing history.

He said, “I am aware that the Opposition Leader has issued a statement on this issue and while he is entitled to his own opinion, he is not entitled to his own facts.  Under his leadership, the Hon Roy McTaggart as then Minister for Finance secured in September 2020 a US$403 million line of credit at a rate of 3.25% that expires in June of this year.”

At a press briefing in September 2020, Leader of the Opposition Hon. Roy McTaggart stated that the borrowing was sufficient for the “short to medium term” and that provision had been made for up to CI$170 million in further borrowing in the future, which would “give whoever is occupying the Cabinet in 2021, it would give them that authority to borrow money if it becomes necessary.”

Minister Saunders added, “The PACT government now occupies the Cabinet and believes that with interest rate at its lowest, this is the best time to explore all available options. In September of last year, the Isle of Man which has a similar credit rating as the Cayman Islands, secured a 30-year £400 million bond at a rate of 1.625%, which is half the rate the previous Government agreed. While they borrowed in a different currency, it still serves as a credible indicator of the current market conditions.  It is therefore only sensible that we find ways to save the government money while securing funding to invest in our people and infrastructure.”

The Deputy Premier also sought to reassure the public that no decisions would be made outside of the public arena, despite the Opposition’s apparent surprise over the Government’s request for information on a potential bond issue.

Minister Saunders clarified, “The request on the government procurement site is for information only to enable us to review all the options available to refinance the public debt.  We are investigating multiple opportunities and will choose the option(s) most beneficial to the people of the Cayman Islands, present and future. Of course, whatever proposal we choose will be debated in Parliament, where each Member will be able to have their say on the matter – on both the Government and Opposition benches.  If necessary, we also hold public meetings for the public to have their say. The PACT Government is committed to transparency, and to being people-driven first and foremost.”

He also addressed the misconception that borrowings would be used to cover operational expenses, saying, “As I noted in my budget address in November of last year, the day-to-day expenses of the Cayman Islands will be paid for by day-to-day revenues.  In short, we can meet our day-to-day operational expenses. Furthermore, under my tenure as Minister of Finance, we will see our financial position return to compliance with the Public Management and Finance Act despite two years of suffering the adverse financial effects of the COVID-19 pandemic.”

Minister Saunders outlined the improvement in public finances since the PACT Government took office in April 2021.

He said, “In March of 2021, one month before the general election and one month before this government took office, the financial forecast was bleak. The Pre-Election Economic and Financial Update (“PREFU”) prepared by the Ministry of Finance forecasted a deficit of more than $98 million for the 2021 financial year. I am pleased to report that the actual results for 2021 are expected to be around $100 million better than when this government took office.”

The Finance Minister continued, “My friends, the PREFU also forecasted that the government would need to borrow $140 million last year. I am pleased to report that we only borrowed just over $8.3 million to keep the line of credit established by the previous government alive. I am also pleased to report that the additional $170 million that the Opposition Leader previously alluded to will not be required by this government.  We have turned the government’s financial position around from a forecasted deficit of almost $60 million in 2022 to a surplus of close to $20 million – an improvement of almost $80 million in 2022.”

Minister Saunders was also critical of what he described as the previous administration’s disregard of looming social welfare liabilities.

He said, “The very vocal Opposition had eight years to address the looming social welfare liability of the future as the Baby Boomer, Generation X and Millennial segments of our population age without adequate pension and health insurance provisions. Yet, they did nothing.  I and many of my colleagues in the PACT Government have been sounding the alarm on both the inadequate pensions system and the lack of health care for seniors long before the issue became a pressing one.”

He said, “The Opposition started assistance programmes while Cayman was in the depth of the COVID-19 pandemic to help our people who had lost their livelihoods almost overnight. When they were doing it, it was considered a necessary hand-up. The PACT government is now duty-bound by the ongoing effects of the pandemic to continue these programmes until displaced workers have returned to employment. We are seeking to ensure that displaced Caymanian tourism workers are hired first by the hospitality industry and find it ironic that this is now being criticised as hand-outs! Hand-outs that the Opposition campaigned on increasing had they won the election. Matthew 23, verses 27-28 address the issue of hypocrites.”

Returning to the refinancing issue, Minister Saunders said, “This Government, and I, have continued to reiterate time and again that we want to reduce the costs being laid on the people of these Cayman Islands. And that refers to both the cost of living and the cost of public debt. The high cost of living is a struggle for almost every Caymanian. We have already introduced programmes and waived duties to alleviate this.”

In closing, the Finance Minister highlighted the difference between the economic policies of the PACT Government and the previous administration.

He said, “The imputation by the Opposition is that it is impossible to have both a healthy, balanced budget and a healthy, empowered population. The PACT government intends to show that it is indeed possible in a country as fortunate and wealthy as the Cayman Islands, where even in times of struggle and relative hardship, we emerge on the other side. We can show this because we believe at our core that the only way to grow our economy and empower our people is to introduce programmes and opportunities that will grow our shrinking middle class.”

A video of the Deputy Premier’s full statement may be viewed online at  https://youtu.be/ZwboG5B_Aus