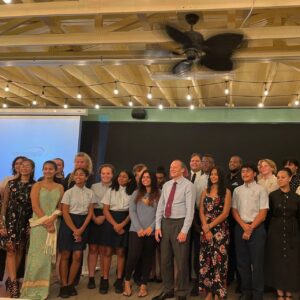 More than 50 young people received Bronze and Silver Duke of Edinburgh medals and certificates at the Turtle Centre recently.

The single largest awards presentation in the local programme’s history (41 Bronze and 11 Silver awardees) was addressed by the patron, His Excellency the Governor, Mr. Martyn Roper, and by Minister for Youth, Hon. Bernie Bush. Premier Hon. G. Wayne Panton attended to congratulate the recipients and present awards.

The evening was memorable as it was not only the first awards ceremony for more than two years, due to Covid-19, but also because of the minute’s silence called at the start of the programme. The silent tribute marked the passing of the programme’s founder and global patron, The Duke of Edinburgh earlier this year.

The Governor noted: “The Duke of Edinburgh Awards Scheme has a long and proud history in Cayman of over 50 years. It supports our youth to develop life skills with a focus on self-development 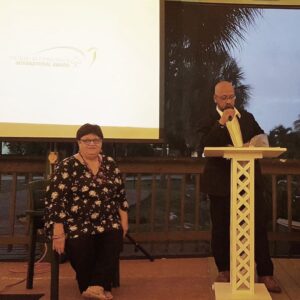 and individual improvement whether it is serving the community, cultural, vocational or manual skills, physical recreation or team working on an expedition. It is a competition against oneself. Our public and private schools encourage their pupils to get involved.”

The Minister said, “Given my portfolio, which champions the development of Caymanian youth, and my previous work as a Duke of Edinburgh award trainer, the aims of this globally-recognised youth enrichment programme resonate with me

“I congratulate the awardees’ success in earning these awards, and am certain that these accolades will be just one of many milestones of excellence to mark their years going forward,” he added.

Mr. Roper, the Premier and Minister Bush presented medals and certificates to the recipients. Nathaniel Forbes, a Silver awardee, was absent since he was one of two cyclists representing 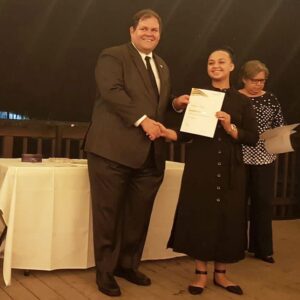 the Cayman Islands in the Dominican Republic.  Attendees were told that he hopes to qualify for the Pan American Youth Games in December.

Speaking of the opportunities open to young people aged 14 to 24 years old in joining the scheme, National Chairman Ms Katherine Jackson said: “The award programme has opened avenues of life for me that I would not have thought possible. I have travelled and seen the world, met people of all cultures and ethnicities, made friends in many nations, and have dined with queens and princes.

“Through the award programme, we have the opportunity to climb hills and mountains, wade through streams and rivers, hike through jungles and meadows, even go to the Amazon jungle in a prop plane,” she added.

Ms Jackson said that the calibre of the programme’s participants means that she is confident that many will become leaders in their chosen fields.