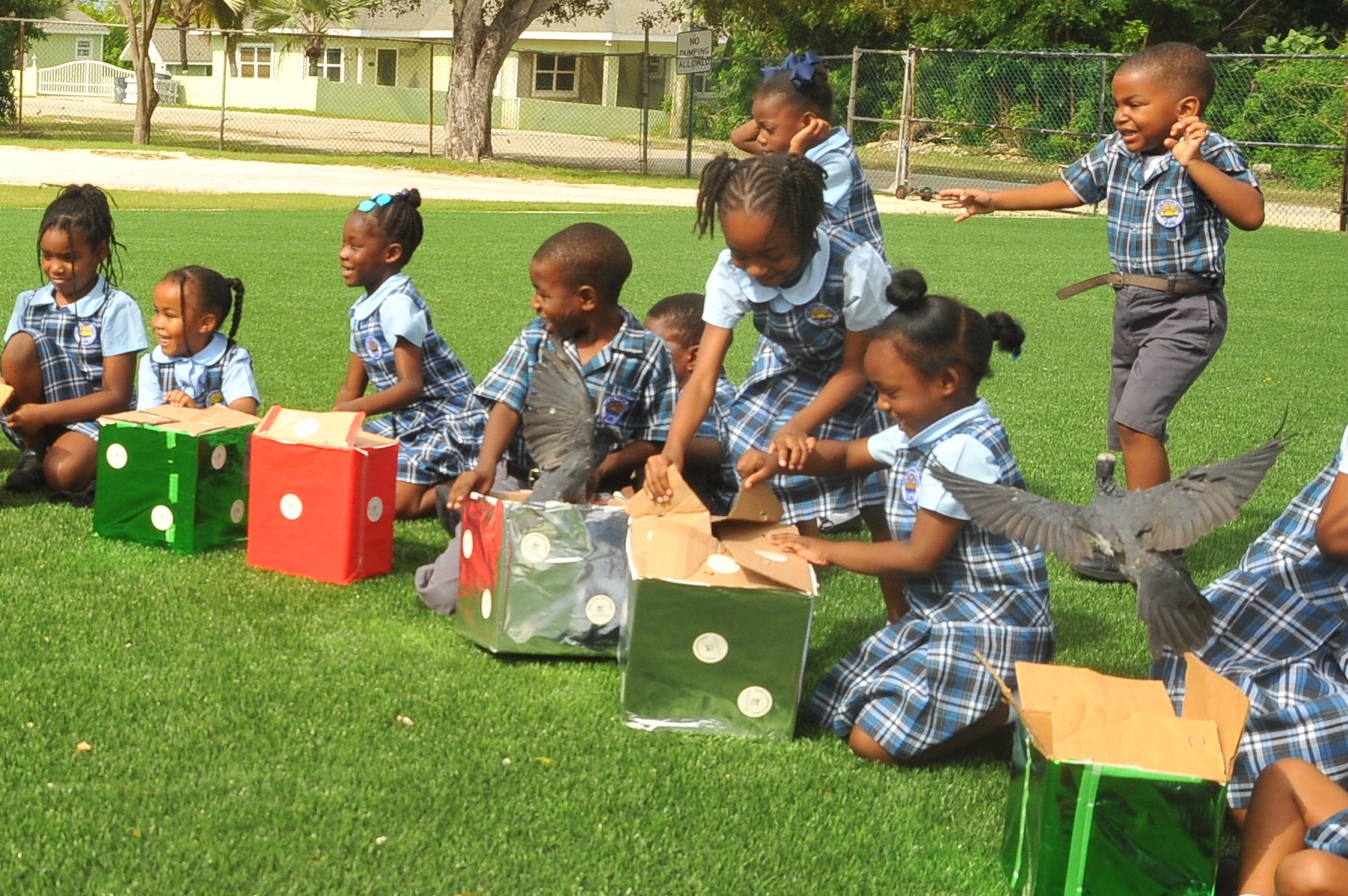 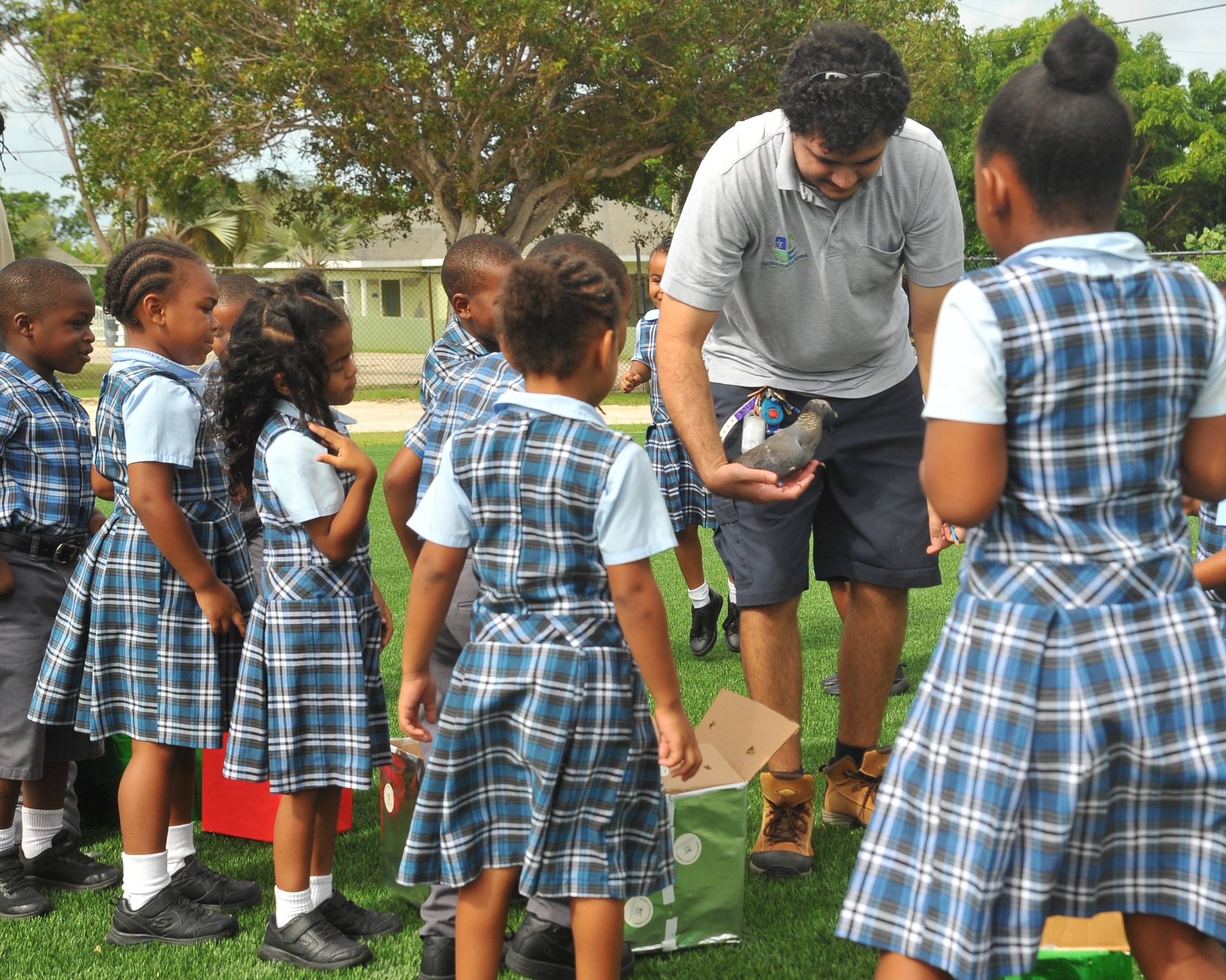 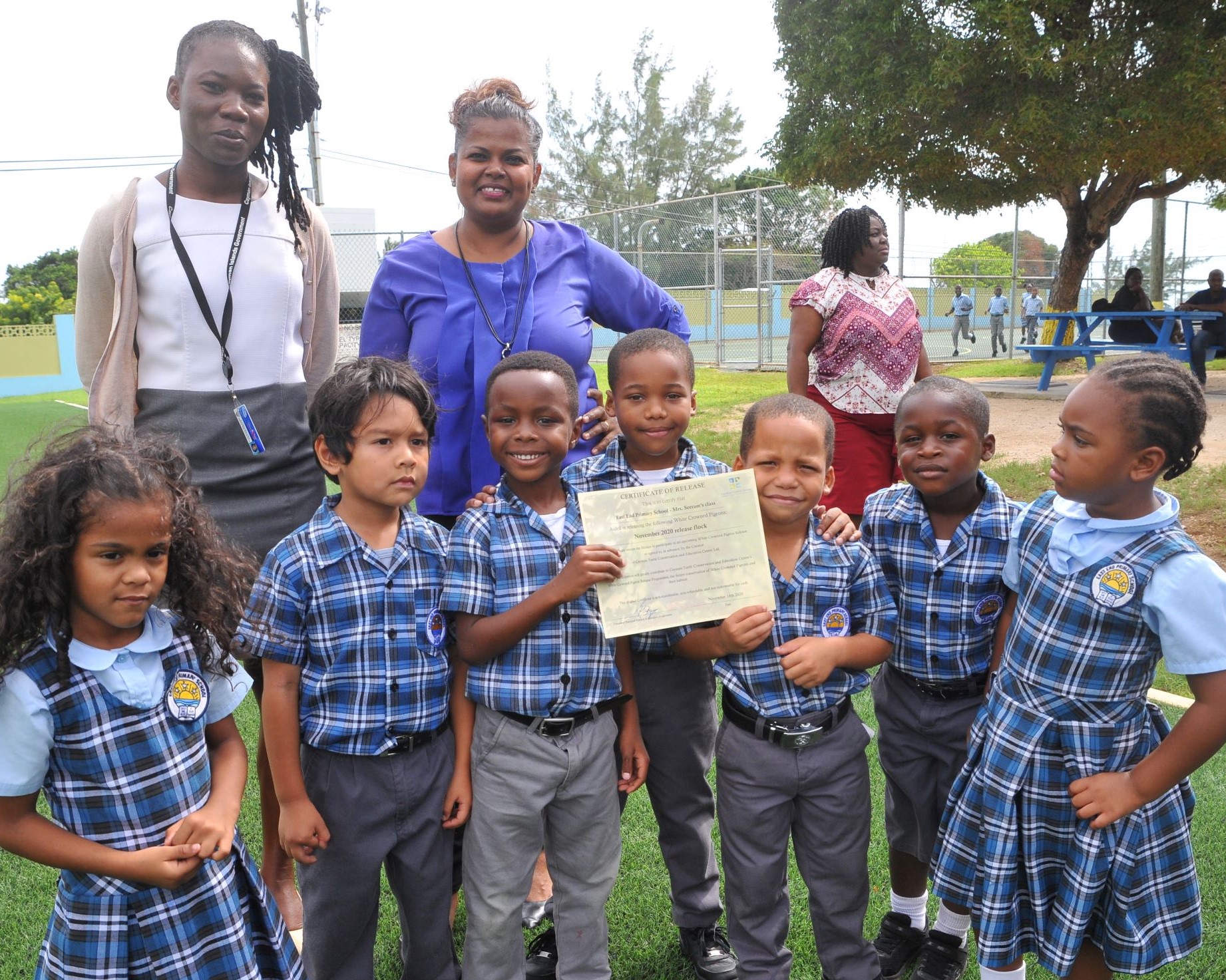 Twenty-four (24) near-threatened White-crowned pigeons began their new life in the wild recently, with the help of Key Stage 1 students from East End Primary School. The released pigeons were part of Cayman Turtle Conservation and Education Centre’s captive breeding programme which began shortly after Hurricane Ivan devastated many natural habitats, leaving important wild birds such as this species of pigeon, as well as Cayman parrots, in a vulnerable situation. Since that time, the Centre has released several White-crowned pigeons, and more than a dozen Cayman parrots, all raised from eggs laid within the facility. The aim is to boost their wild populations, which still face the ongoing threat of habitat degradation.

Five crew members from the Cayman Turtle Centre, including Terrestrial & Education Curator Geddes Hislop, Education Programmes Officer Shona McGill, and the Centre’s veterinary team transported the birds to the school safely in carriers, so that the children could have this unique experience take place at their school.

“The White-crowned Pigeons we released were born and raised in our free-flight Aviary at Cayman Turtle Centre and had just recently passed their quarantine, health checks and feed transition, so they were all ready for release into the wild,” Mr. Hislop said.

“White-crowned Pigeons are a protected species in Cayman. They are fruit-eating pigeons that are important seed dispersers for many native Cayman hardwood trees such as Sea Grape, Pepper Cinnamon, and Ironwood.”

Before the release, Ms. McGill talked to the Key Stage 1 children about what pigeons eat, as well as other interesting facts including how, some weeks before their release, the pigeons are trained to eat natural, wild food such as sea grapes, wild fruits, and berries, so that they will know exactly what to look for in the wild. Ms. McGill also told the children that whenever a new spot is chosen for the release, it must be a place where there are plenty of trees in which to nest and find food, and where the pigeons will be able to find plenty of fresh water to drink.

“Getting kids involved in conservation from a young age is very important,” Ms. McGill said.

“They are very interested in the wild environment, and it helps them to learn very easy and simple habits to take into adulthood to help them conserve species.”

All the children gathered in a big semicircle, so that there were about two students per release box. Not all the pigeons flew out at once, and one or two seemed to be a bit hesitant but the children seemed to really love it, and ran around their school field afterwards, pointing to them perching on trees or flying high in the air.

Six-year-old Ariana said: “I let one of the pigeons go today. Its name was Lilian, if it was a girl, and Billy if it was a boy. When I let it out of the box it was a bit scary, but I am not scared anymore.”