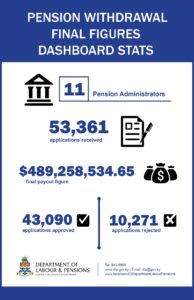 The final figures of the Department of Labour and Pensions National Pensions (Amendment) Act 2020, which allowed persons to make emergency withdrawals from their pension accounts to alleviate the financial strain of the COVID-19 pandemic has now been confirmed and stands at CI $489,258,534.65.

This is just over $45.79 million from the initial figures released late 2020. Based on statistics from the Department of Labour and Pensions, all pension administrators have now submitted their final numbers which indicate that a total of 53,361 applications were received, of which 43,090 were approved and 10,271 were rejected.

The ability for persons to withdraw from their pension accounts came to an end on 31st October 2020.