The PACT Government has made history in the first 100 days of its administration with the enactment of the Cayman Islands’ first-ever Ministerial Code of Conduct. 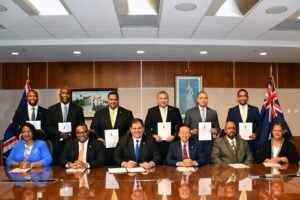 The PACT Government has made history in the first 100 days of its administration with the enactment of the Cayman Islands’ first-ever Ministerial Code of Conduct.

The Premier, Hon. Wayne Panton states in the foreword of the document, “I am beyond pleased to publish this Ministerial Code of Conduct which was approved by the Cabinet on Tuesday, 27 July 2021.  This is another historic moment for the Government and people of the Cayman Islands.  I am especially pleased that this matter was given priority by my colleagues in the PACT Government for completion within our first 100 days in office.”

The Ministerial Code of Conduct provides a comprehensive general code of conduct and also gives guidance on a wide range of specific issues, including dealing with possible or perceived conflicts of interests; the acceptance of gifts and/or favours; and Ministerial travel.

Premier Panton said, “Our commitment as the PACT Government is to be People-driven, Accountable, Competent and Transparent.  This Code of Conduct reinforces this commitment and clearly sets out our standards for adhering to the principles of good governance.”

The Premier also noted that the Code of Conduct addresses one of the Broad Outcomes outlined in the PACT Government’s first Strategic Policy Statement, which is “Strengthening Good Governance for More Effective Government” and promotes greater accountability within the Executive branch.

Mr. Panton said, “The more transparent we are, the more accountable we are to the public. The better we are at transparency, the better we will get at decision making and resource allocation.”

As part of the general code of conduct, Ministers are required to behave in a way that protects the integrity of the decision-making process and upholds the highest standards of propriety and to comply with this Ministerial Code of Conduct at all times.

One portion of the Code of Conduct mandates that Cabinet Ministers are expected to comply with the Nolan Principles, otherwise known as the Seven Principles of Public Life.

Premier Panton reiterated his Government’s commitment to the principles outlined in the Code of Conduct and to overall transparency as one of its core ethical pillars.

He said, “We remain humbled by the awesome responsibility of our role as Ministers.  It is our duty to engender the trust and maintain the confidence of the people we serve.  We as the PACT Government believe that to whom much is given, much is required.  The call for greater accountability and transparency has been answered by the publication of a framework for the conduct the public can expect from us and that we expect of ourselves.”

His Excellency the Governor Martyn Roper offered his congratulations to the Cabinet for this monumental step.

He said, “The approval and enactment of the Ministerial Code of Conduct is a strong indicator of the Government’s commitment to accountability and transparency. It is an integral part of good governance, and encourages greater trust between the wider community and those they have elected to represent them.”

The full Ministerial Code of Conduct is available online at:
https://www.gov.ky/publication-details/ministerial-code-of-conduct-v11-27.07.21

Premier Panton’s comments on the Ministerial Code of Conduct may be viewed at:
https://youtu.be/kN0q6Gt_U-4