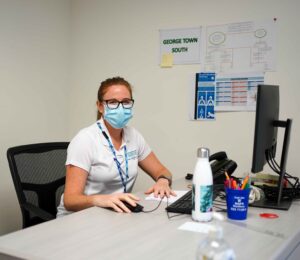 “Although the COVID-19 pandemic may have set the world back in the fight against ending AIDS by 2030, the AIDS crisis taught us how to handle COVID-19 and many medical experts compared the two pandemics,” said HIV and STI Programme Coordinator Laura Elniski. “The COVID crisis could see an HIV resurgent, therefore we urge persons to come out and take advantage of the free and confidential HIV testing. The COVID-19 pandemic can also shape the future HIV and AIDS response in the Caribbean and impact our move towards reaching the goal of ending HIV and AIDS by 2030.”

A recent UNAIDS report shows that countries with progressive laws and policies and strong and inclusive health systems have had the best outcomes against HIV. In those countries, people living with and affected by HIV are more likely to have access to effective HIV services, including HIV testing, pre-exposure prophylaxis (medicine to prevent HIV), harm reduction, multi-month supplies of HIV treatment and consistent, quality follow-up and care. The Cayman Islands ensure to provide all the above.

The Cayman Islands join the rest of the world to focus attention on the importance of accelerating the response to HIV over the next five years to set the world on course to end the AIDS epidemic by 2030 as part of the Sustainable Development Goals.

Four decades after the first cases of AIDS were reported, it remains a major public health crisis and only a few countries meet the 90–90–90 UNAIDS target for 2020. At the end 2019, 77% of all people living with HIV in the Caribbean knew their status, 81% of diagnosed people were on treatment and 80% of those on antiretroviral therapy were virally suppressed. A survey conducted by PANCAP (Pan Caribbean Partnership Against HIV and AIDS) in the Caribbean showed that during 2020, facility-and community- based HIV testing services reduced by two-thirds (69%) in countries due to the COVID-19 pandemic. Therefore, HSA and the Cayman Islands Red Cross encourage the public to take advantage of the country’s HIV and AIDS support services and book an appointment to get tested by contacting Laura Elniski at laura.elniski@hsa.ky or 244-2507, or Health Promotion Officer Therese Prehay at 244-2632.

HIV Testing week provides an opportunity to educate the public about prevention and protection against HIV and other sexually transmitted diseases as well as free testing to know one’s status.  The testing procedure involves a quick and simple blood test. Persons who are seeking testing or counselling can indicate to the registration clerks that they would like to register for free HIV testing. The results will be available in three working days or less and will be given to the patient only.

How is HIV transmitted?

How do I know if I have HIV?

How is HIV transmitted?

How can I protect myself?

You can NOT get HIV from:

If you think you have HIV or believe you are at high risk of contracting HIV – get an HIV test. The test is safe and private. You do not have to give your name if you do not want to.

What is HIV Testing?

A small sample of blood will be taken from your arm, sent to a laboratory, and tested for HIV antigens and antibodies. The test is always strictly confidential.

HIV positive means that antigens and antibodies to HIV were detected. A confirmatory test must be completed to diagnose HIV. This test is sent overseas and may take up to 10 days to return.

HIV negative means that no HIV antigens and antibodies were detected at this time. In almost all cases this means the person is not infected with HIV. With the fourth-generation testing that HSA uses called HIV Combo (HIV antigen and Antibody testing) the previously known window period of three months has been reduced to 2-6 weeks.

The test is only accurate if there are no other exposures between the time of possible exposure to HIV and testing.

What is antiretroviral therapy?

It is a combination of drugs, to be taken daily, to stop HIV replicating in the body.

It cannot cure HIV, but it can reduce the amount of virus to undetectable levels in the blood.

Most people with HIV take a combination pill once a day but others can take up to four pills a day depending on their specific health needs.

Everyone is recommended to start treatment straight away after being diagnosed.

In the UK, 98% of people diagnosed with HIV are receiving treatment – and 97% of those have an undetectable level of the virus – meaning they are unable to pass on the infection.

But figures from Public Health England estimate that only 92% of the 101,600 people living with HIV have been diagnosed.

If you are unable to attend the set dates for free HIV testing, you can make an appointment for confidential testing at any time with your health care provider or contact Laura Elniski 244 2507 or laura.elniski@hsa.ky.