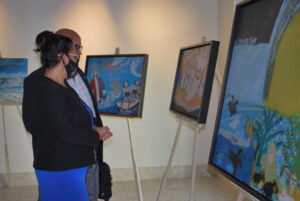 Staff and visitors to the Government Administration Building in George Town are in for a rare treat from now until the first week of the New Year. Nineteen paintings of national significance are on display by visionary artist Miss Lassie, on the ground floor’s Cayman Gallery opposite Treasury, from 9a.m.- 5p.m, weekdays to Tuesday, 4 January 2022.

The paintings form part of the larger “My Life is My Art” exhibition, which opened at the Mind’s Eye Education Centre on Miss Lassie’s property in early November, and was the first major retrospective of her work in nearly two decades. This smaller show, also curated by Cayman National Cultural Foundation (CNCF) and similarly sponsored by the Ministry of Youth, Sports, Culture & Heritage, features reproductions rather than originals. 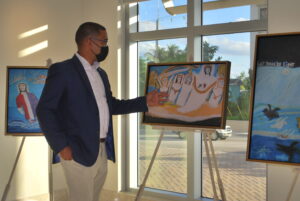 Miss Gladwyn “Lassie” Bush took up painting in her sixties. By the time of her death in 2003 the George Town native had become a prolific chronicler of Caymanian and religious themes.

The travelling exhibition’s latest venue is another chance to view so many of Miss Lassie’s work in a single venue. Previously, the show had been displayed at: 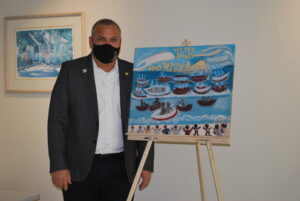