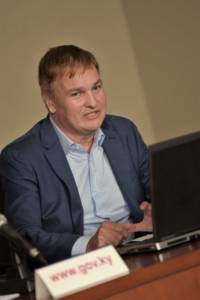 Mr Ranger, a civil engineer, who led the Office that oversees all major Government capital projects passed away unexpectedly this week.

After joining PWD’s Major Projects Office in 2016, he took a lead role on a number of projects expected to facilitate significant improvement in the delivery of public services in the Cayman Islands. Over the years these included the new John Gray High School campus, the renovated Owen Roberts International Airport Terminal, the COVID-19 Emergency Field Hospital at Family Life Centre, and the Court redevelopment project to name a few.

Commenting on Mr Ranger’s passing, the Deputy Governor remarked: “Peter was a consummate professional, who was passionate about his work and the value it could bring to the people of the Cayman Islands. All those who knew him across the civil service keenly feel his loss. Our deepest sympathies go to his wife and sons.”

“Peter was a high performing civil servant within the Public Works Department, and has left a legacy of delivering significant projects that will have a lasting impact on the lives of Caymanians. He will forever be remembered and respected for his contribution to the Cayman Islands Government” said Acting Director of Public Works Troy Whorms.

Mr Whorms added that the Public Works team was committed to continuing to deliver on the priorities of the Government, and by extension the people of the Cayman Islands.

Tamara Ebanks, the Acting Chief Officer in the Ministry of Planning, Agriculture, Housing and Infrastructure to which PWD reports, stated: “On behalf of the Ministry staff and our departments I would like to say that it was an honour and a privilege to be able to work alongside Peter. His contributions to the team, to the wider Government and the Cayman Islands will always be valued.”

Describing Mr Ranger as a friend and colleague, Acting Chief Officer for the Ministry of Health and Wellness Nellie Pouchie said he worked tirelessly to fulfill the various projects that he was tasked with.  “He was the epitome of professionalism and his work on the Integrated Solid Waste Management System was phenomenal.  He will be sorely missed by the team”, Ms Pouchie remarked.

Meanwhile Chief Officer in the Ministry of Tourism and Transport Stran Bodden concluded: “Peter was the ultimate professional, and the most hard-working and dedicated person that I know. He had a depth of knowledge of many varied subject areas.  He was personable, humble, and a genuine person, who will be greatly missed by all who knew him around the world.”