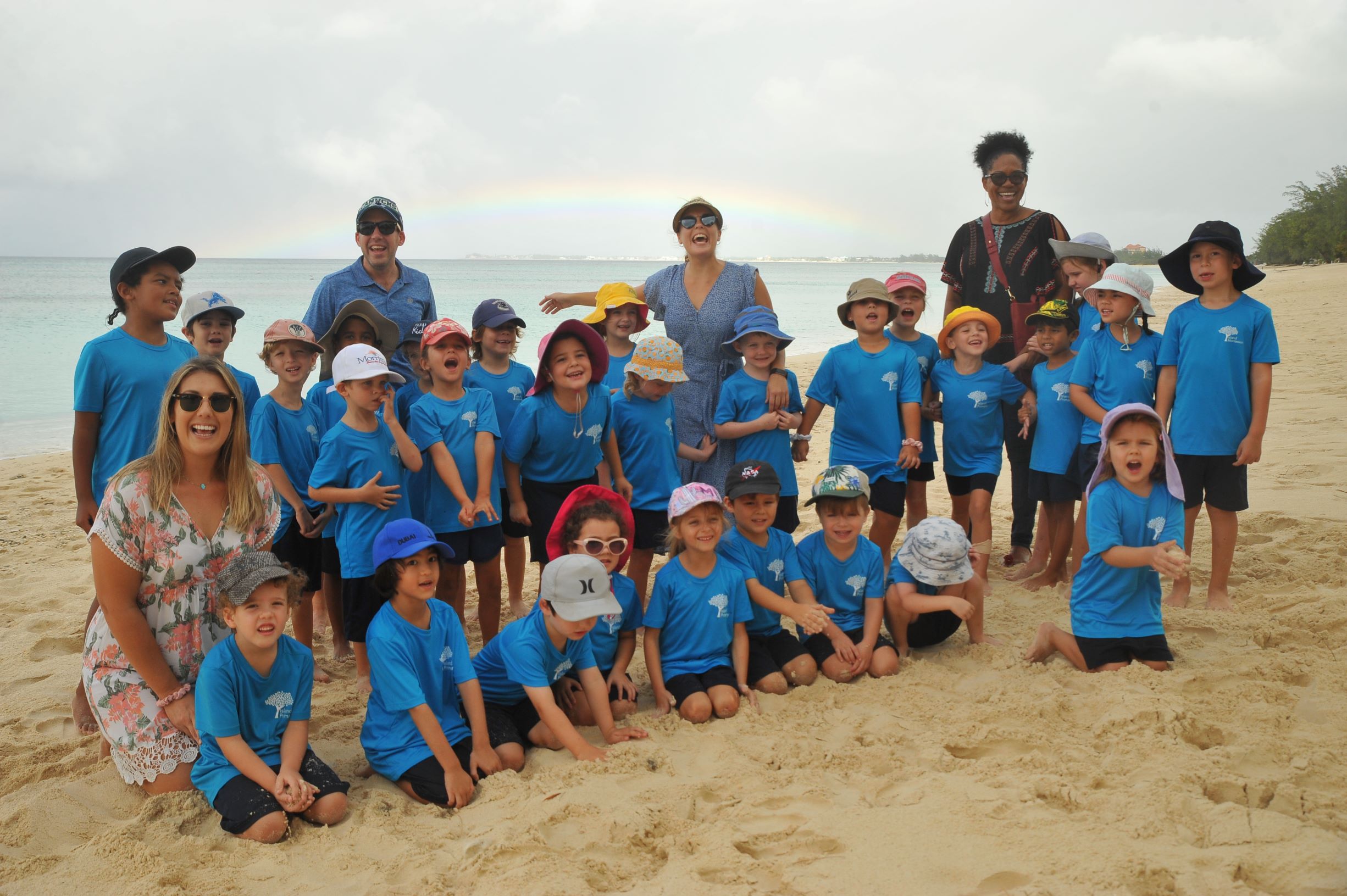 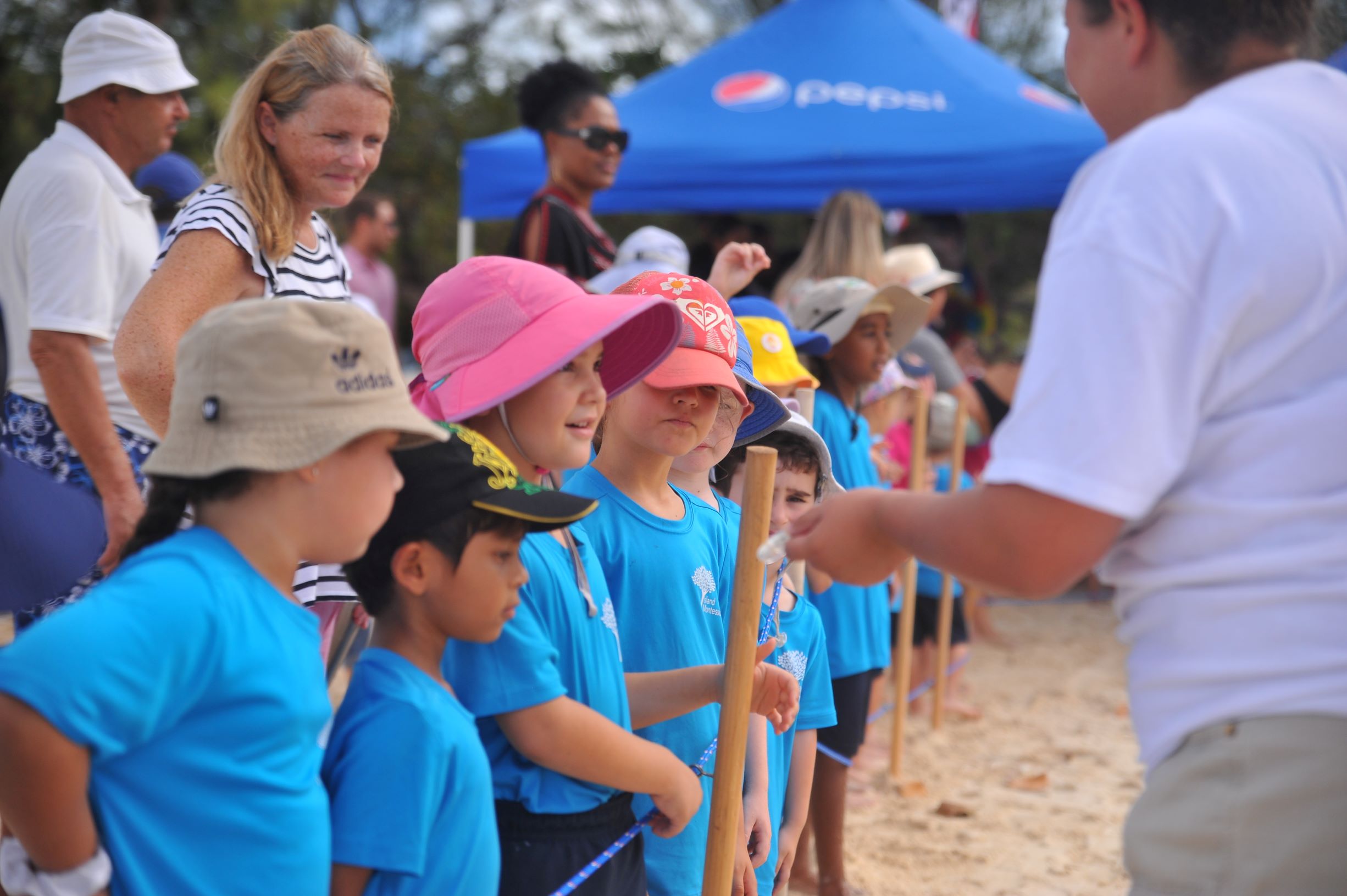 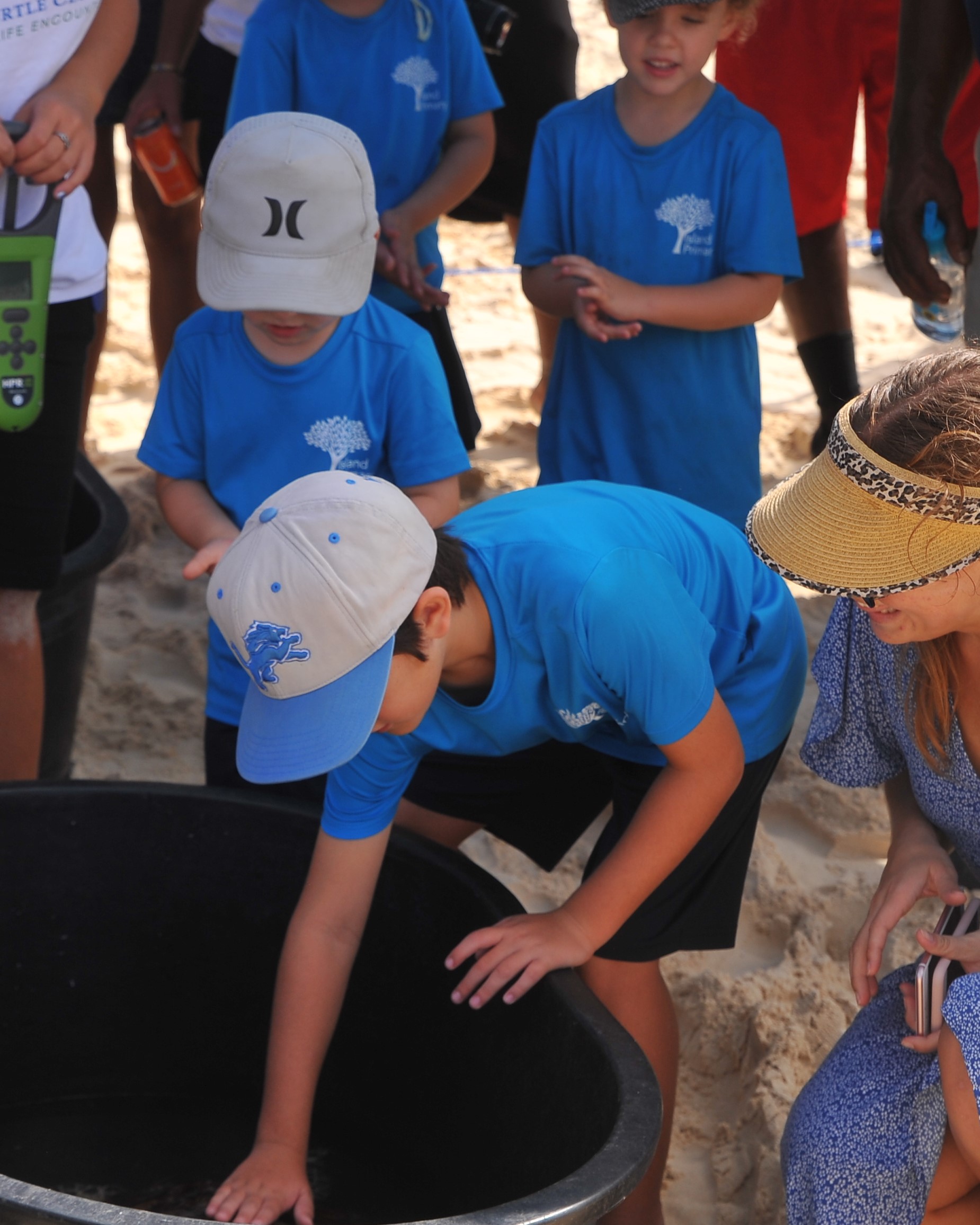 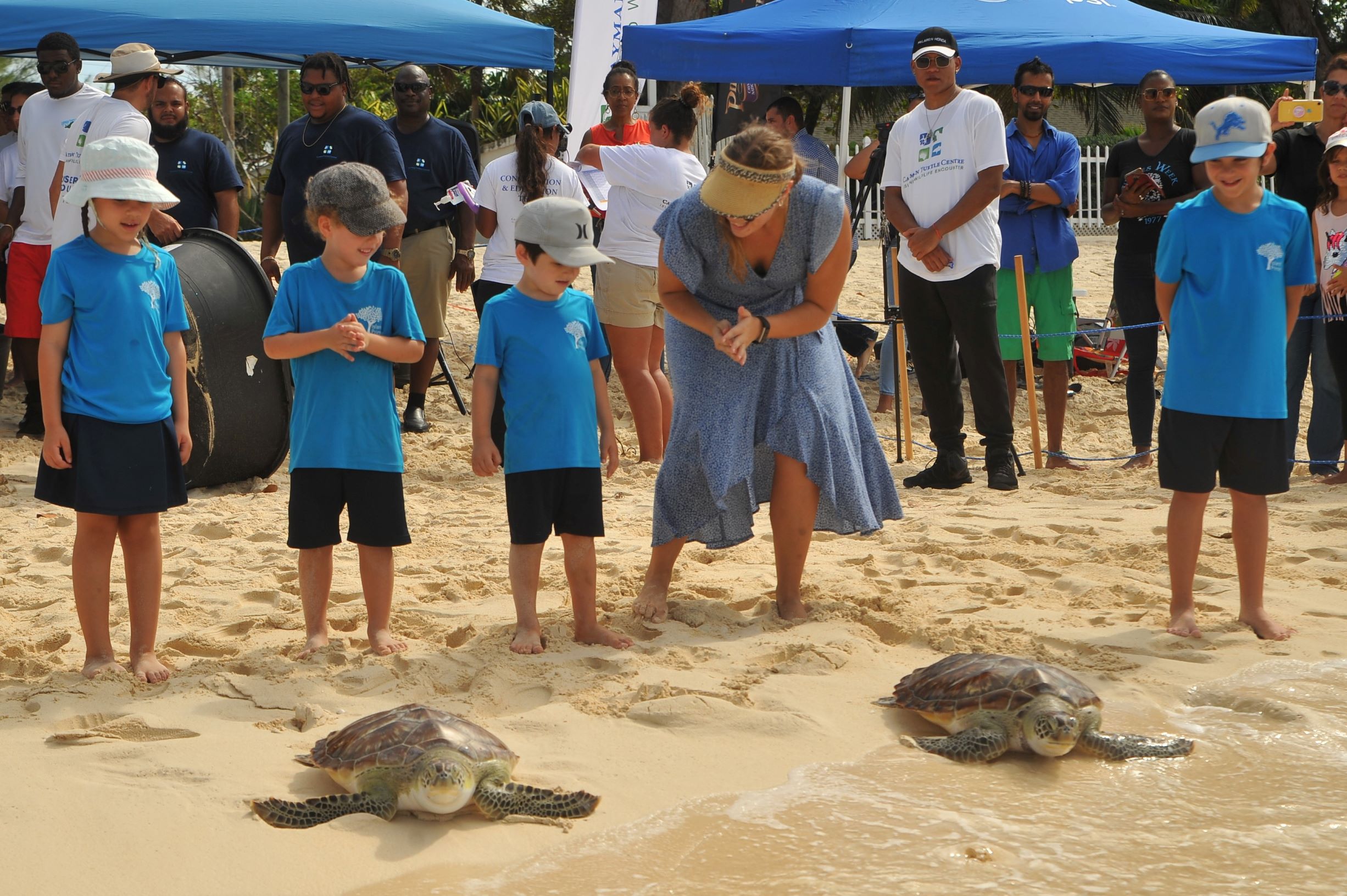 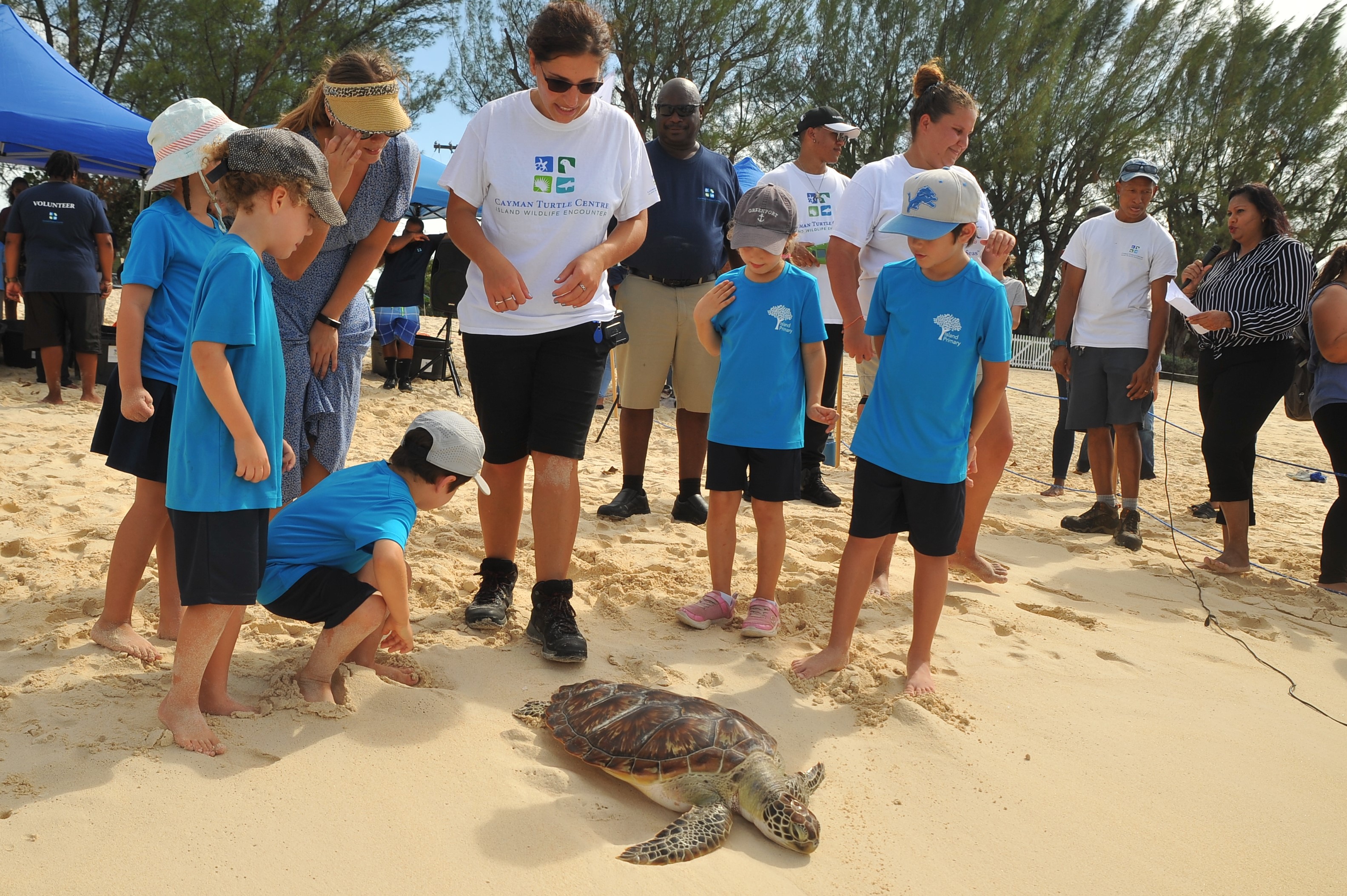 Cayman Turtle Conservation and Education Centre was proud to partner with the Cayman Islands Pirates Week Festival to host their annual Pirates Week Turtle Release at Governor’s Beach on Friday 20th November. This year, due to COVID-19 restrictions, it was a primarily virtual event with viewers from around the world able to watch online as the ten yearling Green sea turtles were released into the wild.

A small group of competition winners were fortunate enough to be able to attend the event in person. One class from Island Montessori was randomly selected from primary schools across the island which took part in Cayman Turtle Centre’s turtle-naming competition. The name they chose was “Shelley the Island Turtle” and several of the students, between the ages of four and seven, were able to meet and escort their turtle to be released.

“We are really happy to have won the competition.” Mr. Toby Wade, Teacher at Island Montessori, said.

“The children loved being able to pick the name for the turtle, “Shelly the Island Turtle”. It came from the word, ‘shell,’ and the word ‘Island.’ We have been learning about Columbus, calling the Cayman Islands ‘Las Tortugas’, and we wanted to be able to put it all together. It also goes with our name, ‘Island Montessori.’”

CTCEC’s Education Programmes Officer, Ms. Shona McGill, spoke to the students about the turtles that were being released and told them all about the dangers that they will face in the wild.

“These turtles are called ‘Head-Started’ turtles because they are given a head-start in life.” Ms. McGill said.

The young turtles are raised within the safe environment of Cayman Turtle Centre until they are 1-2 years old, before being released into the wild. At that age their large shells make them big enough that only a few large predators, such as sharks, for example, would try to eat them.

“Sea turtles are still in danger from humans, and especially from plastic items of trash, which may float in the sea and the turtles can mistake for jellyfish, one of their favorite snacks.” Ms. McGill continued. She invited to children to become ‘Turtle Rangers’ which means they will promise to pick up at least three plastic items a day and put them in the trash. Ms. McGill also described how important Green sea turtles are to the marine environment, keeping the seagrass beds, which are home to all kinds of crabs, shellfish and young fishes, in a good, healthy condition.

The Centre has released more than 33,000 turtles into the wild since the programme began in the 1980s. Despite the challenges of the COVID-19 pandemic, this year is all set to become another chapter in the Centre’s story of how they brought back the Green sea turtle from the brink of extinction here in the Cayman Islands. Not only have the number of turtle nests risen significantly since the Department of Environment began their annual turtle nest surveys in 1999, but a recent study, sponsored by the UK’s Darwin Plus Initiative, called “How many came home,” showed conclusively by analyzing turtles’ genetic profiles, that nine out of ten of Cayman’s green nesting turtles were related to those that had been released from the Centre previous years.

“This event is, and has been for many years, one of the staple events for the Pirates Week Festival.” Ms. Melanie McField, Chief Cultural Officer for Festivals and Carnivals, Cayman National Cultural Foundation, said.

“It’s part of our giving back to the community, and showing our keen interest in wildlife preservation, in partnership with the Cayman Turtle Centre. It’s obviously a great event for families and children, and one of those events that anyone can attend. That’s what Pirates Week is about – providing something for everyone to enjoy.”