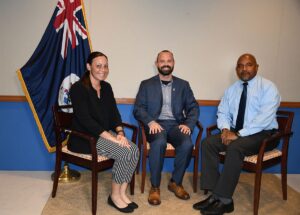 The Ministry of Home Affairs (MHA) is pleased to announce the appointment of two Acting Deputy Chief Officers following a rigorous and competitive selection process.

Speaking to the appointments, Home Affairs Acting Chief Officer Michael Ebanks said, “In their new roles with the Ministry, they will now lead the pursuit of government’s policies and priorities across all six MHA departments. It’s an absolute privilege to be working alongside such talented public service professionals. I have full confidence in the ability of Mrs. Malice and Mr. Lewis to successfully oversee and deliver on the Ministry’s complex portfolio of security and public safety operations.”

Highlighting the success of the Civil Service’s commitment to succession planning Mr. Ebanks noted, “During their tenures as departmental directors, Julian and Lisa have invested in succession plans which equipped both DPSC and DCR with continuity of exceptionally talented Caymanian leadership.”

Subsequently, in addition to the core Ministry, Home Affairs is reaping the benefits of succession planning. Both DCR and DPSC have multiple new acting appointments within their senior teams.

Following her promotion, Mrs. Malice said: “I am extremely humbled to be given this opportunity to work along with the diligent teams supporting Minister for Home Affairs Hon. Bernie Bush and (Acting) Chief Officer Michael Ebanks.  I look forward to contributing to the tremendous work taking place in MHA in this acting capacity.”

Mrs. Malice brings a Bachelor’s degree in social work, and accredited qualifications in project management and change management to her new post, along with 17 years of experience within the public sector. She also credits, former Director Teresa Echenique for her mentorship, under DCR’s succession planning.

Prior to her promotion, Mrs. Malice was DCR’s first Deputy Director before her succession to the department’s Director in 2019. Both roles included leadership of 44 staff, policy formulation, advice and monitoring, providing strategic leadership, preparing and submitting high level reports, preparing the department’s annual budget and advising the Deputy Governor and Cabinet on community rehabilitation matters.

Before this month’s promotion, Mr. Lewis served as DPSC Director since 2016, leading a staff of 31. As one of two Caymanian Assistant Directors, he was mentored by the previous Director Brent Finster as part of a succession planning initiative. Duties and responsibilities during the tenure included assisting in drafting surveillance devices legislation, leading software systems administration; and heading up training and development, coordination and implementation.

Following his promotion, Mr. Lewis said, “I am truly honoured to be offered the opportunity to further support the Ministry’s goal to strengthen public safety in alignment with the Government’s commitment to delivering on its strategic broad outcomes.”