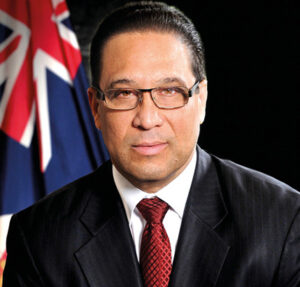 The Government of the Cayman Islands is delighted to note the decision of Her Majesty the Queen to confer on Hon. Alden McLaughlin, MBE, QC, JP, MP the honour of a Knighthood in the New Years Honours list for 2022.

Sir Alden McLaughlin has been appointed as a Knight Commander of the Most Distinguished Order of Saint Michael and Saint George.

As Premier, I consider it a tremendous privilege to offer congratulations on behalf of the Government and people of the Cayman Islands to Sir Alden McLaughlin KCMG, MBE, QC, MP, JP on the granting by Her Majesty the Queen of this distinguished honour.

This is a day of celebration and great pride for all Caymanians as a son of our soil has been bestowed one of the highest honours in becoming only the second Caymanian to be knighted nearly 28 years after the late Sir Vassel Johnson received his knighthood in 1994.

Sir Alden has dedicated the majority of his professional life to public service. He first entered representational politics by successfully standing for election in 2000, which effectively brought a blossoming career as a partner in a local law firm to an end.

In particular, there are three distinct areas of achievement during his outstanding career of public service that have set his journey apart.

Secondly, he successfully completed two consecutive terms as Premier between 2013-2017 and 2017-2021, leading two administrations via coalition.  I had the honour of being invited to serve as a Minister during his first term as Premier.   Both administrations will be remembered for the exceptional support of the Finance Ministers whose tireless efforts helped to place the Cayman Islands’ economy on sure footing. Throughout his time as Premier, Sir Alden sought to build a strong, productive and mutually respectful relationship between the Cayman Islands and the United Kingdom and few can argue that his representation of the Cayman Islands on the international stage was undertaken with anything but dignity, diplomacy and tact.

Thirdly, the global COVID-19 pandemic no doubt defined the final year of his second administration.  He led an administration which made the difficult but important decisions to close the borders, institute lockdowns, adopt an eradication of COVID-19 policy and launch a national vaccination campaign once vaccines became available.

Today marks a new and most unique storyline in the history of the Cayman Islands.  In considering the rarity and magnitude of this occasion, this is certainly a unifying moment for our community as the achievements of one our own have been recognised with great distinction by Her Majesty the Queen.   This is certainly a most fitting way to begin 2022, the year in which we celebrate The Queen’s Platinum Jubilee.   I am therefore pleased to see the tireless work of my friend and former colleague honoured in this manner.   While we currently serve our Country on opposite sides in the House of Parliament, we continue to share a passion and love for our Caymanian people as we recognise that to whom much is given, much is required.

While this award is bestowed upon an individual, it is also a direct reflection on the people who have shaped that individual’s life.  A famous African proverb notes, “If you want to go fast, go alone.  If you want to go far, go together.”  Indeed, Sir Alden will be the first to tell you that he did not achieve this on his own.  Importantly his life was built upon a firm foundation of values including, commitment, service and a strong work ethic which were instilled by his late parents, Mr. McNee and Mrs. Althea McLaughlin.  I am certain that they would be beaming with pride today.

I also want to pay special tribute to his wife Kim, now- Lady McLaughlin, and their two sons Daegan and Caelan for their perseverance on the journey of public service with him.  While his family has always eschewed the spotlight, their countless sacrifices in support of Sir Alden are rightfully acknowledged.

Sir Alden often quotes Otto von Bismark who once observed that, “Politics is the art of the possible, the attainable — the art of the next best”.   It is no doubt that in committing his life to serving the people of the Cayman Islands, Sir Alden has had to figure out the possible, the attainable and the alternatives in an effort to reach consensus or to advance the cause of our people, and for this we should all give thanks.

This recognition by Her Majesty the Queen is well deserved, especially for someone who has dedicated the past 21 years of his life to serving our Cayman Islands community in the grand theatre of representational politics.   I can think of no better way to bring in the New Year than to salute our very own, Knight Commander of the Order of St Michael and St George-
Sir Alden McLaughlin.

I also wish to extend sincere congratulations to all the recipients in Her Majesty the Queen’s New Years Honours List.   Each of these individuals have made outstanding contributions to our community and country.  The recognition of their commitment and dedication in their various fields which has benefited our country should be celebrated and they should know they have our collective sense of gratitude.

Issued by: Office of the Premier (CIG)