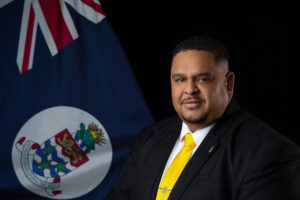 Minister for Planning, Agriculture, Housing and Infrastructure Hon. Jay Ebanks focused on investments in infrastructure, communities, and the Caymanian people themselves in his submission to the 2022-23 budget debate.

Minister Ebanks, who is the Member of Parliament for North Side, referred in his submission to projects already underway and those that will begin now that the first PACT Government budget came into effect on 1 January 2022.

Minister Ebanks said the new budget shows a marked shift in policy to that of prior administrations in that it focuses on public services aimed at impacting people’s day to day lives.

In his impassioned address to the Parliament, Minister Ebanks said, “This is a people’s budget. This is putting people first, sir. This is putting hope back into the people in the Cayman Islands, sir.”

The Minister for Infrastructure referenced the impact on people when outlining major upcoming infrastructure projects and upgrades throughout his speech.

With regard to the provision of a new undersea telecommunications cable to augment overseas connectivity currently provided by the Maya-1 Cable to the USA along with the Cayman Jamaica Fiber System (CJFS), Minister Ebanks noted Cayman’s need for connectivity to the outside world.

“The PACT government understands the critical importance of a modern high-speed cable infrastructure. The intention of the government is to implement a submarine cable modernization project that provides a new resilient, redundant infrastructure that supports the Islands’ increasing dependency on high service.”

“The government has earmarked funds for this project, Mr. Speaker and my ministry is committed to ensuring its timely delivery to this island,” he said.

New community spaces, including parks and other public recreational sites also fall under Minister Ebanks’ remit, and he gave an update on ongoing and new projects for the next two years.

With regard to ongoing enhancements to Heroes Square in George Town, Minister Ebanks revealed that the second phase of the project began in August 2021, and included paving of the pedestrian crossing, installation of urban street lamps, new flagpoles, mature trees for shading and parks benches.

“One thing I can tell you [is] I am committed, as is my good friend from George Town Central, to see this park completed under this administration,” he said. “A park that these people have been asking for, for decades. A park [that] has been back and forth, back and forth but hasn’t gone anywhere.”

Minister Ebanks continued, “We hear the people calling. This PACT government supports its people, we invest in our people.”

He included the Scranton Park as part of the overall revitalization of George Town, saying that previous administrations had focused on the more “elite” areas of the project at the expense of other communities.

Minister Ebanks said, “When the rest of them don’t want to invest in them and they only cater to the elite and don’t worry about nothing else, that’s why we’re here. That’s why we stand up here today. We have to listen to our people, Mr. Speaker. If we don’t listen to our people what [and] who are we here for? For ourselves?”

He said the park was the answer to longstanding plea from the Scranton community, which would now be answered.

“The people have been calling for that. And we are planning to deliver that,” he said.

Minister Ebanks summed up his view on the George Town Revitalization Project, which has continued through several administrations, by saying, “Every government talks about it. They want to revitalize George Town, but as far as we have got now is what this government has really done.”

While discussing community improvement projects, Minister Ebanks noted that plans were in place to move forward with the annual National Community Enhancement programme, known as NICE, which hires unemployed Caymanians on a temporary seasonal basis to complete community beautification projects including roadside and beach clean-ups.

While supportive of the programme, which falls under his ministry’s remit, Minister Ebanks sees it as a temporary, stop-gap measure that does not cure the ill of Caymanian unemployment.

He continued, “If that is the case, we need to fix it. I want to see these people have a full-time job, sir. A full-time job!”

Minister Ebanks also addressed the need for recreational facilities for young people, especially in the eastern districts of Grand Cayman.

He mentioned that a track for the Cayman Islands Hot Rod Association is moving forward with government support on the eastern side of Grand Cayman, and bemoaned the loss of popular annual jet ski challenges including Jet Around Cayman and the East End Surf Challenge.

Minister Ebanks revealed that he is working to bring organised jet ski races back to the Cayman Islands, so young people can find positive things to get involved in.

He said, “Mr. Speaker, now that we’ve moved off with the hot rods, Jet Around Cayman, just so that  the buzz can actually get going and the kids can know that there is some hope in that pipeline for them, to see activities coming back, especially coming back to the eastern side of the island.”

A video of Minister Ebanks’ budget highlights may be viewed online at https://youtu.be/3y7ZHtxvijQ