Inspector Courtney Myles: A lifelong commitment to policing in the Cayman Islands 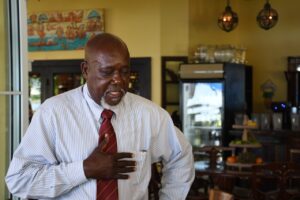 Looking back, it’s clear that former RCIPS Inspector Courtney Myles has fulfilled a lifelong commitment to policing in the Cayman Islands. Not only did he grow up three hundred yards from the George Town Police station, but in 1979 at just 17 years of age he joined what was then, the Cayman Islands Police Force.

Inspr. Myles early start in the police came as a result of a ‘careers week’ talk about Policing at Cayman Islands High School by the Late Ch/Supt. Vernon Ebanks, who was tasked with recruiting young men and women directly from school into the Force. The talk was so interesting that he could not resist doing the entrance examination, which he took the following week and on passing, subsequently joined the Force. 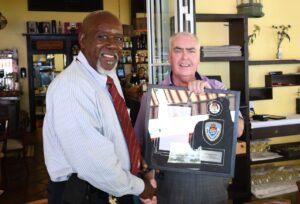 Even though Inspr. Myles was not yet 18, the Service saw his potential and gave him a position at front desk as a diarist for six months. Once age requirements were met, Inspr. Myles was posted to the Traffic Department where he was shown the ropes by senior officers in the department. He remembers being told that ‘the broom and the tape belong to you’. This meant he had to do all the sweeping up of the debris at all traffic accidents and had to hold the end of the tape. Vehicle inspections and drivers licensing also fell under the Traffic Department’s duties at the time and it was here that Inspr. Myles was taught the examination process. During his time in the Traffic Department he received tutelage from PC Whorms, PC Evans and PC Ebanks. 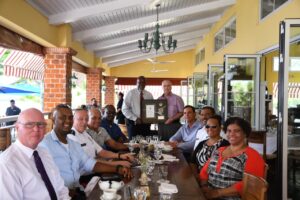 Growing up in George Town meant Inspr. Myles knew a lot of people which proved useful during a stint in the Process Department where he was given a service license and placed in charge of serving summons. After a year, he returned to George Town Police Station and started on shift. This meant working nights and a variety of tasks including as a guard in the prison, as the cells were out the back of the station. While on shift he can still recall a night when the going off Sergeant, Hortor Rankine aka ‘The Marshall’, called him into the office and sat him down. He said “Myles I am going to hand the shift over to you as you are the most fitting to handle it despite your limited experience”. He then informed him that he along with the other constable and the traffic officer would manage the road and that “if something happens that you cannot handle to call me immediately”. Luckily that night nothing out of the usual happened, but this experience highlighted to him that one day he could be a supervisor.

In July 1978, Inspr. Myles attended the Regional Police Training Centre for six months in Barbados. He recalls arriving on a Sunday night and being transported to the center on the back of an old Bedford truck which had wooden seats. When he reached the school his bottom was sore as he swore that the driver deliberately drove into every pothole on the way.

“The training was extremely hard but good – I would do it again. I had to do it. It molded me into a man”. You had to pass all the exams. If you failed an exam you had to stay in the school over the weekend and study and repeat the exam on the Monday. Exam results were only given out on a Friday evening at five o’clock when everybody was dressed to go to town. If you saw a recruit come out in slippers and shorts you knew he had failed. Thank the Lord I never failed any!”

It was during this training that Inspr. Myles ‘fell in love with drill’ which is known locally as marching in parades. He represented the Cayman Islands in the drill competition and placed within the top five students. “Drill has been a passion of his until this day and it’s where he made a lot of his friends. The recruits he trained with came from many of the surrounding islands, and he still maintains close contact with a lot of them. One of his classmates is now the Deputy Commissioner of Barbados – DCP Oral Willliams – who he is still in contact with.

On returning to Grand Cayman in January of 1979 Inspr. Myles was posted to East End for one month to relieve the late PC Logan Minzett while he took leave. “Sadly, PC Minzett died in a tragic road accident the morning I was to take up duties from him. Seeing the work that had to be done in the East End I requested a second officer and my one month post turned into a year, and more”.

During his tenure in East End, Inspr. Myles proved himself in Traffic and on recommendation to the then Superintendent McCann, he became a Traffic Officer in 1980. He continued with Traffic where he went on to sit the Sergeants exam in 1980 and became a supervisor in the department. He can still recall the comradery of the Traffic team. Mr. McCann aka Pinky ran a tight ship and always held you accountable. Like Inspr. Myles he had a passion for drill, and he recalls many days where Mr McCann called him into his office for a short course in how to give drill commands. He was always passing on knowledge to him.

Whilst there he rode his private bike to work on a daily basis and saw the need for the return of the motorcycle patrol. He convinced Mr. McCann that a bike section was needed. Bikes were purchased and the current fleet manager, Mr. Elliott and I started riding along with former Sergeant Wilfred Myles. “Mr. Elliott and I were known as ‘Cayman Black Chips’. When the Queen visited the Cayman Islands in 1983 both of us were her out riders.”

In 1984 Inspr. Myles took the Inspectors promotion examination and passed. He was the youngest ever Caymanian to be promoted to Inspector at the time. He remained in this position for sixteen years as there was limited upward mobility. These years gave him the opportunity to hone his skills and he became a Chief Inspector in 2000.” During this time Inspr. Myles also worked as the officer in charge of all the Cayman Islands Police Stations. “The Brac was most interesting as you felt like you were the Commissioner of Police there and were treated as such”. This is where he met DCP Ennis who was Sergeant at the time. They remain friends up until this day.

Over his long career in the Service Inspr. Myles remained committed to ongoing learning and development and undertook a number of training and academic courses. “The one that stands out the most to me is the International Commanders Programme, where I received a Post Certificate in Criminal Justice and Police Management from the University of Leicester Department of Criminology”. As a young Inspector he was also a Court Prosecutor for a number of years and was tutored by the Chief Justice, who was the Crown Prosecutor at the time, but his most proud moment was when he commanded the parade when the Queen visited the Cayman Island in 1994. He was given this role on DCP Kevin McCann’s recommendation. The parade can be seen on YouTube and he has enjoyed watching it numerous times since.

After serving for over thirty years Inspr. Myles retired from the service in 2009, but then came back for more. He went on to do a further five years with the department of Vehicles and Drivers Licensing where, as the Assistant Manager he was responsible for inspections of all vehicles in the Cayman Islands, and the theory and practical testing for driver licensing. He also acted for one year as Deputy Director. Then in 2017 he learned of a request for past officers to assist with developmental needs within the Service. He decided to offer his services and was overwhelmed when asked by the Commissioner to head up the Community Policing unit.

During his tenure he was able to foster a better working relationship with the public and return trust between the Police and Public. Whilst there he was part of the formation of the Community Safety Officers Programme. The Community Policing Department is very dear to him, and will always be part of him. He can’t seem to step away completely as he still finds himself doing community work for the betterment of life in the Community.

Finally, it must be mentioned that Inspr. Myles late father, Henry Alfred Cross was a police officer who came to the Cayman Islands from his native Jamaica when the Cayman Islands was under Jamaican governance, and subsequently he returned to Jamaica after a tenure with the then ‘Cayman Islands Police Force’. He and his father were both Inspectors at the same time.

He states; “It has been a pleasure to serve the Community of the Cayman Islands as a Community Police Officer.”