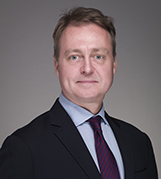 Seasoned offshore disputes and insolvency lawyer Timothy Haynes has joined Kobre & Kim as a partner in its Hong Kong office.

Mr. Haynes will build upon the firm’s offshore capabilities in Asia Pacific to meet the growing demand of high-net-worth individuals and companies in the region. His addition follows the recent arrival of another prominent offshore lawyer, Ulrich Payne, to the firm’s Cayman Islands office.

“Tim’s practice has focused for many years on working collaboratively with other law firms on specialized international disputes and thus was a natural fit for our firm,” said founding partner Michael Kim.

Mr. Haynes has an array of experience both advising on and litigating high-value, cross-border management, shareholder, commercial insolvency and corporate restructuring disputes, often with a nexus to Hong Kong, the Cayman Islands and the British Virgin Islands. For over two decades, he has represented a wide range of Asia Pacific-based clients in all aspects of commercial dispute resolution, from corporate shareholders and liquidators to high-net-worth individuals. The Legal 500 (Asia Pacific) has referred to Mr. Haynes as “at the top of his game both commercially and legally.” The 2020 Edition describes him as “undoubtedly the best offshore dispute resolution partner in Hong Kong.”

Mr. Haynes is particularly skilled at handling high-stakes management and shareholder disputes and other contentious matters arising out of distressed corporate and investment vehicles. In addition to being a Chartered Arbitrator, Mr. Haynes is an experienced advocate who has appeared in numerous cases before the first instance and appellate courts in both Hong Kong and the Cayman Islands.

“Kobre & Kim’s conflict-free model and strong presence in both Asia-Pacific and Offshore jurisdictions such as Cayman Islands and British Virgin Islands are a perfect match for my practice,” said Mr. Haynes. “I’m excited to be part of its global offshore offerings.”

Before joining Kobre & Kim, Mr. Haynes led the Insolvency and Dispute Resolution Group at Walkers in Hong Kong. Prior to that role, he practiced at Baker & McKenzie, also in Hong Kong.