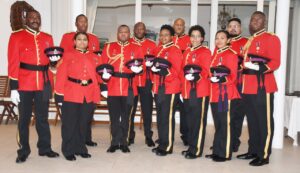 The Cayman Islands Cadet Corps (CICC) was honoured for its work during COVID-19 and recent tropical storms at a medal presentation ceremony at Government House.

The evening presentation and reception, on Wednesday, 24 November 2021, was hosted by His Excellency, the Governor Mr. Martyn Roper. In all, 16 recipients were awarded Cayman Islands Cadet Corps Disaster Mitigation Medals and Certificates of Commendation.

Recipients, who included officers, instructors and cadets in the CICC and its Marine Detachment were recognised for exemplary disaster mitigation work during COVID-19 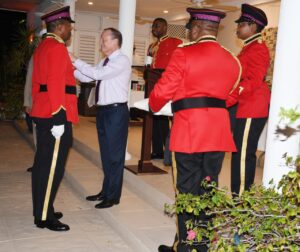 During these periods of crisis their duties included: 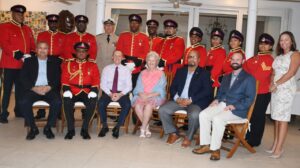 In his welcoming remarks, Mr. Roper thanked corps staff and cadets for their exceptional auxiliary work safeguarding the Cayman Islands over the past year and a half.

The Governor also recognised Minister Bush’s commitment to pursuing a vision for the enhanced role of CI Cadet Corps that displayed the Minister’s confidence in the corps’ abilities and robust leadership.

Minister Bush remarks expressed gratitude and pride in the work of the corps in a defining period in its history and that of the nation.