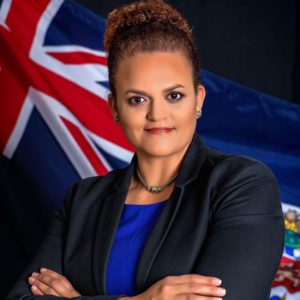 The Ministry of Financial Services participated in the 2020 Chamber of Commerce Economic Forum and updated members of the Cayman Islands business community on recent developments within Cayman’s financial services sector on Friday, 14 August.

Financial Services Minister Tara Rivers addressed attendees of the virtual conference on the theme of “Opportunities for Growth”.

She also participated on a panel, joined by Michelle Bahadur, the Director for the Department of Financial Services Policy and Legislation within the Ministry, on future financial services considerations for Cayman. Representatives from the Strategic Economic Advisory Council, the Blockchain Association of the Cayman Islands and Cayman Finance also were on the panel.

In her remarks, Minister Rivers spoke on the progress being made to commence the operational aspects of the jurisdiction’s virtual assets service providers (VASPs) regime.

‘The Ministry, with input from the Cayman Islands Monetary Authority (CIMA), is currently working on regulations to operationalise the VASPs regime. CIMA is also working on an action plan to address the implementation of the VASP-related laws and its various regulations. The implementation plan will focus on resourcing and building a risk-appropriate supervisory framework. An industry consultation on these enhancements will commence shortly,’ Minister Rivers said.

‘The Ministry is making great strides in finalising commercial enhancements to the Companies Law. These enhancements, which will introduce a new Restructuring Officer regime, have been met with strong support and agreement from industry, the judiciary and CIMA, acting in their respective roles. We expect to bring forward the amendments by the end of this year,’ she said.

Aside from virtual assets and corporate restructuring, Minister Rivers spoke on sustainable finance from a Cayman context; progress made to address the EU list of non-cooperative jurisdictions for tax purposes; and the Financial Action Task Force re-rating of Cayman’s anti-money laundering, countering the financing of terrorism and counter proliferation financing regime.

She also spoke about the effectiveness of local and international engagement with key stakeholders, which, for example, has influenced the reporting on the Cayman Islands in the US State Department’s International Narcotics Control Strategy Reports.