Due to recent high tides and heavy rainfall the Mosquito Research and Control Unit (MRCU) is expecting to combat an increase in biting mosquitoes within the coming weeks.

MRCU will be conducting control operations to combat the emergence but mosquito numbers are expected to remain high for the next two to three weeks.

The team at MRCU understands that mosquitos can become a major annoyance during the summer months and suggest the community follow a few simple steps to help including: 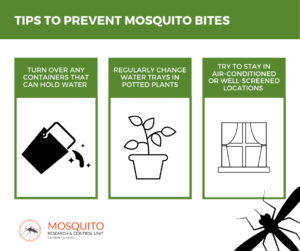 More information on planned mosquito control operations can be found daily at www.mrcu.ky or follow on Facebook at http://bit.ly/MRCUCAYMAN