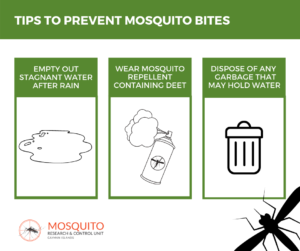 The Mosquito Research & Control Unit (MRCU) informs the community that recent high tides, which started on 3 April, have caused flooding in the mangrove breeding areas of the Black Salt Marsh Mosquito (Aedes taeniorhynchus).

The flooding resulted in high numbers of mosquitoes emerging 10-14 days later. On the 20th April tides increased again which has resulted in further flooding of the mosquito breeding areas. This second peak in high tides is expected to result in a further large emergence of biting mosquitoes during the first week of May.

MRCU will be conducting aerial and ground fogging operations to bring the emergence back under control.

The team is sympathetic to the distress this causes to residents of these areas and advise its operations should bring some relief for residents.

Members of the public are advised to remain indoors during the peak biting period of this mosquito (7-9 pm) and to wear mosquito repellent when outdoors.

More information on planned operations can be found daily at www.mrcu.ky or follow on Facebook at http://bit.ly/MRCUCAYMAN