My Art is My Life: Miss Lassie Exhibition Opens to Appreciative Attendees 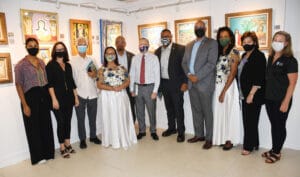 The private opening of the first major retrospective of Miss Lassie’s paintings in years attracted a host of attendees recently. Guests to the ‘My Art is My Life’ exhibition included His Excellency the Governor, Mr. Martyn Roper; Deputy Premier and Minister for Financial & Economic Development and Border Control & Labour, Hon. Chris Saunders and Deputy Governor, Hon. Franz Manderson.

The show begins its one-day tours of the districts at North Side Civic Centre, Friday, 19 November 2021 and East End Civic Centre, Saturday, 20 November, times to be announced. 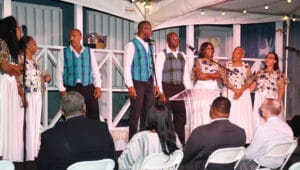 Minister Bush said: “Here in Miss Lassie’s sand yard with her wattle and daub house and the Mind’s Eye Education Centre, we are at the very epicentre of where the artist created her dynamic works, 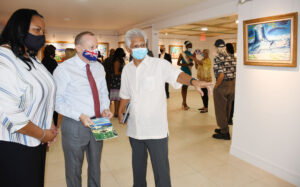 which are some of the brightest and the best examples of Caymanian art.

“Gladwyn Klosking ‘Lassie’ Bush was 62 years old when she first put paintbrush to canvas. The brilliance and expertise of this prolific storyteller of distinctly Caymanian themes and her intensely vivid religious life, makes this show a must-see exhibition,” he explained.

Minister Bush affirmed that the ministry is working diligently to ensure partnerships with those entities whose mission is to support initiatives that showcase Caymanian creativity and culture.

Mr. Muttoo said: “The property, Miss Lassie’s story and her paintings are gifts of collective 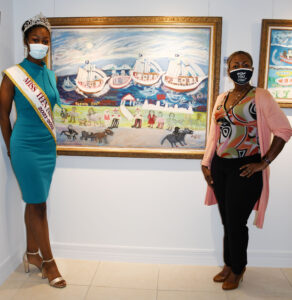 cultural memory, which we have all but lost.